The Afghan War Rug is a modern reinterpretation of an age-old art. Where the regular oriental carpet has an abstract design, these rugs are figurative, including tanks, guns and other weapons, and usually show a map of Afghanistan. They also deal with a very specific subject matter – the troubled recent history of Afghanistan.

Examples include rugs celebrating the defeat of the Soviets, who withdrew from Afghanistan in 1989, to this one. It is similar to the Soviet Exodus mats (note the column of tanks heading north). However, it is dated to the year 2002.

Some of the lettering is in Latin script, the top text is in Farsi, apparently reading “The army of al-Qaeda is leaving Afghanistan”. According to the website www.warrug.com, which specialises in selling modern carpetry of this type, this rug

“is a transitional piece between the Soviet story rugs and the War on Terrorism rugs (…) Until the US eliminated the Taliban regime, this style of rug was woven by refugees in Pakistan. After we drove al-Qaeda and the Taliban back to the age of the Cave Man, these weavers were able to return to their native homes and produce these rugs around Mazar I’Sharif and Sherberghan.”

By weaving recent history into mats, these Afghan artisans are revitalising the tapestry-as-news school of carpetry that had its most famous early example in the Bayeux Tapestry, which detailed William the Conqueror’s usurpation of the English throne. 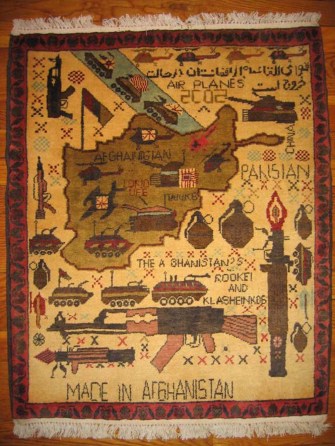 Many thanks to Pál Szabó for alerting me to these strange mats.