This parody map shows the world as Ronald Reagan (US president 1980-1988) might have imagined it. Even as parody, it indicates an interesting duality: on the one hand, it presents a view of the world as it no longer is, the Cold War having ended; on the other hand, it illustrates a disparaging outlook on the rest of the world that some would argue persists in to this day in American culture and foreign policy.

The map shows an ‘us’ vs. ‘them’ bipolarity, with exaggerated sizes for (non-American) ‘good guys’ such as:

Other areas are so insignificant (either in a ‘good’ or ‘bad’ way that they’re portrayed as tiny:

Interestingly, the US itself is also divided into good and bad: 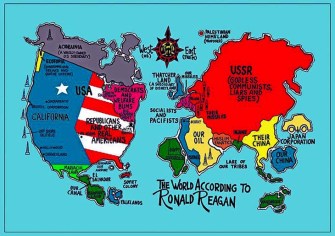 Image taken from this Wikipedia page.

The Enclaves and Exclaves of Cyprus

They could have made it more complex, but they would have had to try very hard