Despite recent outbreaks off the Horn of Africa, piracy still conjures up other images than freebooting Somali fishermen.Your standard-issue pirate from Central Casting will have an eyepatch, an earring, a parrot on his shoulder or a wooden leg – or any combination of the above. He will almost inevitably have the accent of the English West Country (which explains all the Aarrrh-ing), and will surely be on a quest for treasure.

We owe this persistent stereotype to, and can blame its most recent incarnation in the increasingly awful Pirates of the Caribbean-franchise, on Robert Louis Stevenson’s Treasure Island (1883), the classic adventure novel about pirates and buried treasure. Stevenson’s book also spawned, in later derivations and imitations, the trope of the treasure map as an essential part of the story.

Which makes the question all the more interesting: was there a real-life model for the generically named Treasure Island – and if so, where was it? It seems to have been a chance invention by Lloyd Osbourne, RLS’s stepson, while holidaying with the family in a Scottish Highland cottage. As Osbourne later recalled:

“… busy with a box of paints I happened to be tinting a map of an island I had drawn. Stevenson came in as I was finishing it, and with his affectionate interest in everything I was doing, leaned over my shoulder, and was soon elaborating the map and naming it. I shall never forget the thrill of Skeleton Island, Spyglass Hill, nor the heart-stirring climax of the three red crosses! And the greater climax still when he wrote down the words “Treasure Island” at the top right-hand corner! And he seemed to know so much about it too – the pirates, the buried treasure, the man who had been marooned on the island … . “Oh, for a story about it”, I exclaimed, in a heaven of enchantment …”

And that is how Stevenson got started writing Treasure Island – as a back story to the map originally drawn by his stepson. Curiously, the map reprinted in all subsequent editions of the book is not that first map. That got lost when he sent it to his publisher. Stevenson had to redraw his map from scratch, and although he got the chance to match the map to the story, he never was as satisfied with the copy as with the original. Could that original map – worth a treasure by now – still languish in some postal limbo between Scotland and London? 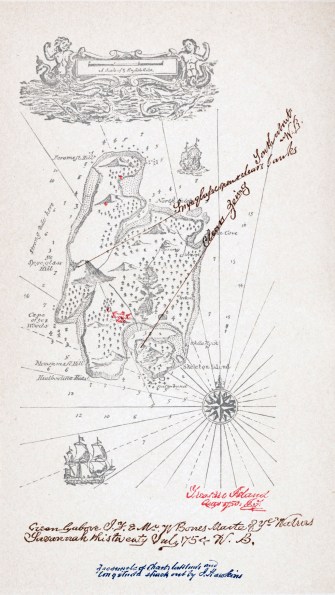 Stevenson didn’t write his novel ex nihilo: he acknowledged the inspiration of works by Washington Irving and others, and of real-life characters and stories as inspirations for Treasure Island. But in how far does this also hold true for the Treasure Island depicted on the crucial map?

A number of speculations and suggestions have been made as to islands that might have inspired Treasure Island.

The map itself, then, is drawn to the scale of 3 English miles, and shows such landmarks as Foremast Hill, Spyglass Hill, Cape of the Woods, Mazenmast Hill and Hautbowline Head. Off the small Skeleton Island, south of the main island, is Foul Ground. Off the west coast is the warning: Strong tide here. On the island itself are mentioned mainly Swamps and Graves, and of course an X that marks the spot: Bulk of treasure buried here. Not all of the lettering is easily readable.

This map was taken here from Kellscraft Studio, a website dedicated to presenting hard to find, previously printed books now in the public domain, such as Treasure Island.

Stevenson’s original map may still be lost, but the second iteration of Treasure Island, the progenitor of all subsequent representations, can reliably be traced, says reader Darren Griswold:

“Here is a possible clue to the whereabouts of RLS’s hand drawn map, as produced to replace that which was lost in the mail.”
“On page 65 of the book ‘This Book-Collecting Game’, published 1928 by Little, Brown and Company, A. Edward Newton tells us that he is ‘the proud owner of the original sketch from which the published map was reproduced.’ “

Alfred Edward Newton (1864-1940) was an American author, publisher and book collector. His collection eventually numbered around 10,000 books, most of which were auctioned off after his death. Perhaps the Stevenson map figures in the catalogues of the three auctions, in April, May and October 1941, by Parke-Bernet Galleries in New York.

Expressing gratitude encourages others to continue being generous, promoting a cycle of goodness.
Up Next
Strange Maps