This map by German illustrator Alphons Woelfle (1938) shows the extent and the divisions of Bücherland (the Land of Books). The Land consists of about half a dozen distinct territories, most of which are explicitly named: Leserrepublik (Reader’s Republic), Vereinigte Buchhandelsstaaten (United States of Booksellers), Recensentia (a realm for Reviewers), Makulaturia (Waste Paper Land), and Poesia (Poetry). The capital of the US of B is the city of Officina (Latin for workshop, and the origin of our ‘office’; the name seems remarkably unremarkable. Possibly there is an old reference or a German word-joke here we’re not getting).

Plotting out imagined places on a map as if they were “real” countries is a favourite trope in curious cartography. The artificial equation of place and meaning allows for double-entendres and other humorous leaps of the imagination on which this allegorical form of cartography thrives. As a sub-genre of cartography, it has been around since at least La carte de tendre, an 18th-century French map of love’s topography (#245). Other examples include a Map on Temperance (#258) or a German map of the Empire of Love (#59). 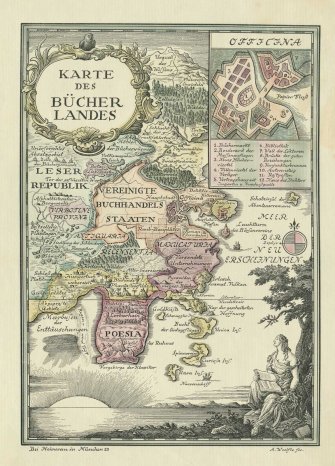 This map was possibly commissioned by the Heimeran Verlag (publishing house) of Munich, a frequent employer of Mr Woelfle’s artisanship – although no information could be found relating to the specific circumstances of this map. One can only presume that it illustrated a book about books, or more precisely, a book about publishing. The look and feel of the map is definitely older than its mid-20th-century age; in a positive case of antiquarianism (i.e. lending something respectability by increasing its age), it has been made to resemble the maps of earlier times (17th, 18th century, I’d say).

Many thanks to Paul K. (of the brilliant BibliOdyssey) for the map, found in the digital archives of the Bayerische Staatsbibliothek.