Had the 19th century Dutch favoured Jerome Wenmaekers’ big idea over that of Cornelis Lely, their country would now look rather differently – and be quite a bit bigger. But in 1876 they rejected the former’s megalomaniacal land reclamation scheme, and in 1892 they adopted the latter’s less ambitious drainage plan. Lelystad now is the capital of Flevoland, the province reclaimed from the sea following Lely’s plan. In an alternate reality, Wenmaekersstad would have been the capital of a much larger administrative area, as Plan A also would have drained off all the water between Flevoland and the Wadden islands – areas Lely chose not to reclaim.

The Zuiderzee (i.e. ‘South Sea’) was the smaller, more obnoxious twin of the North Sea. Both bodies of water were created at the close of the last Ice Age, about 10,000 years ago, by the rising waters that flooded the plain between Britain and the Continent. An inland system of lakes (called Flevo by the Romans) eventally coalesced into the Zuiderzee, which would have been more manageable were it not for its direct connection to the wily North Sea. As a result of this connection, the unstable Zuiderzee was prone to flooding the surrounding low-lying, densely populated areas. A system of dikes and drainage by windmills kept the growth of the Zuiderzee in check, but massive flooding was a recurrent fact of life. As far back as the 17th century, the damming of the entire Zuiderzee was proposed as the only durable solution.

Damming – with the possible bonus of land reclamation – only became technically feasible in the 19th century, when at least half a dozen plans were proposed. The scale of the proposed project was so daunting that even with the approval of the Lely Plan in 1892, it took the Watersnood (‘Great Flood’) of 1916 to propel the reluctant Dutch government into concrete action. It took them over 50 years (1921-1975) to finish the massive project.

Lely’s plan was followed almost to the letter. The Afsluitdijk (Closing Dike) was built to his specifications; dikes further out to sea, even between the Wadden islands, were considered but rejected by Lely as impractical and too expensive. The areas Lely designated for land reclamation contained clay deposits, which were more interesting for agriculture than the sandy soils in the areas that were to remain submerged.   The land reclaimed in the Waddenzee also would not be suitable for agriculture.

In 1932, the Afsluitdijk was completed, and the name of the rump of the Zuiderzee officially changed into IJsselmeer (after the river IJssel). In 1934, the Noordwestpolder (‘North West Polder’) was the first of four projected new dry land areas to be released for cultivation. The Noordwestpolder was later incorporated into the pre-existing province of Noord-Holland. The main new land areas (East and South Flevoland) were reclaimed in 1942 and 1957 respectively.

All of which resulted in the now-familiar Dutch coastline, instantly recognisable on any satellite map. How different the Netherlands would have looked like if Wenmaekers had had his way. But he hasn’t, and consequently has slipped into obscurity. Very little is known about him, except that he was a Belgian engineer, residing in Brussels. I have managed to retrieve two intriguing biographical snippets:

Somewhere in between, he found the time to propose this scheme for the expansion of the Netherlands – only to have it rejected. Wenmaekers’ plan was a maximalist one, eschewing an Afsluitdijk to reclaim land all the way to the Wadden islands of Texel, Vlieland, Terschelling and Ameland. These would be incorporated, two by two, into two larger islands, separated from each other and the mainland by straight and narrow canals, all still connected directly to the North Sea.

In the Zuiderzee, four more islands (with similarly narrow canals between them and the mainland) would be constructed. All of these would be divided in two main parts by a broader canal, entering the new lands south of Texel and abutting northeast of the former island of Urk. A slightly narrower canal would branch of halfway to connect it to Amsterdam.

At first sight, Mr Wenmaekers seems to have been one of those unfortunate, lone visionaries, too far ahead of their time. But his abortive proposals were probably not isolated cases. The late 19th century was a time of grand engineering projects, and thus a fertile breeding ground for multitudes of ideas, patents and proposals, some for grand projects that eventually came to be, many for projects that never left the drawing board. In spite of the world’s most famous palindrome – A man, a plan, a canal, Panama!  – even the Panama Canal was the work of many men, and the result of many plans, most of which are now obscure footnotes to history… 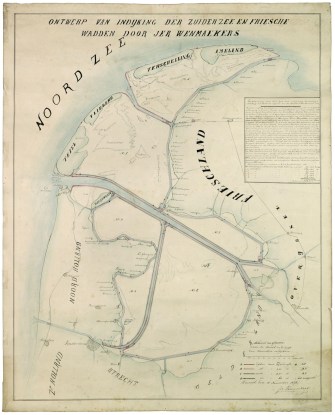 Many thanks to Jeroen Van den Berg and  Stefan Patelski for sending in this map, found here on the flickr stream of the Dutch Nationaal Archief (National Archives).

Perform at your mental peak.
Up Next
Strange Maps