“Brendan Conway in Surrey tried to use his Wales-shaped cookie cutter, cleverly engineered by Marion in his school’s technology department, to make Welsh cakes, but Anglesey and the Lleyn peninsula kept breaking away! Luckily, toast worked better.”

A picture of this Wales-shaped piece of toast was included in this BBC picture series, showing how St. David’s Day was celebrated on March 1st, in Wales and around the world. St. David is the patron saint of Wales, and his feast day doubles as the Welsh national day. In parallel but not quite similar ways, Scotland celebrates St. Andrew’s Day (30 November), England observes St. George’s Day (23 April) and Ireland and the Irish worldwide go crazy on St. Patrick’s Day (17 March).

In recent years, St. George’s Day has become increasingly popular in England, although it is not an official bank holiday yet – as St. Andrew’s Day has been in Scotland since 2006. Whether institutionalised or not, the popularity of both days is dwarfed by that of St. Patrick’s Day, which is celebrated with masses, parades and heavy drinking (a whopping 13 million pints of Guinness are consumed worldwide on St. Patrick’s Day).

St. David’s Day is a rather more sedate occasion, centering on eisteddfodau (concerts), the wearing of traditional dress and of leeks and daffodils (both considered Welsh national symbols) and the baking and eating of Welsh cakes, or, failing that, Wales-shaped toast. 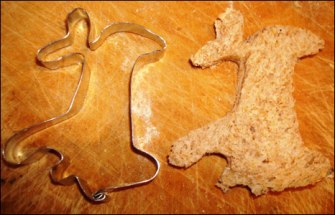 Life is the only physical system that actively uses information.
Up Next
Strange Maps