De Stijl celebrates its 100th anniversary this year. This map is an appropriate homage to its birthplace, the charming city of Leyden in the Netherlands (‘Leiden’ in Dutch, pop. 120,000). Leyden could without much hyperbole be called the Dutch Oxford. The town boasts the country’s oldest university and is home to museums, libraries, botanical gardens and other institutions connected to its position as the country’s prime centre of learning. Leyden is also home to Oudt Leyden, Europe’s (and possibly the world’s) oldest pancake house.

Located in the province of South Holland and possibly inhabited since Roman times, Leyden was granted city rights in 1266. The city’s cloth industry flourished after the arrival of weavers from plague-ridden Ypres in the 14th century. In 1572, Leyden joined the rebellion against Spanish overlordship of the Netherlands and withstood a Spanish siege. In 1575, William of Orange, the leader of the Dutch rebellion, founded the university at Leyden in gratitude for the city’s role in the war against the Spanish. Leyden still celebrates the lifting of the Spanish siege every year on October 3rd, with a parade and a lot of food and drink.

Leyden flourished both academically and economically during the Dutch Golden Age in the 17th century, becoming Holland’s second city after Amsterdam. As in Amsterdam, the layout of the expanding city was determined by grachten (canals). The city’s luck changed with that of its textile industry, pushed out in the 18th century by Holland’s high wages. The city shrunk, and would only start to grow beyond its Golden Age-sized belt of grachten at the turn of the 20th century. 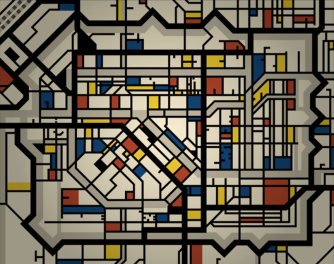 Over the centuries, Leyden was home to many scientists, including Constantijn Huyghens, René Descartes and Albert Einstein, as well as a number of notable artists, such as Rembrandt (a native of the city) and other Old Masters. Leyden was also the city in which Theo van Doesburg founded De Stijl in 1917, together with Piet Mondrian. De Stijl was both a magazine and a movement, founded on the principle of abstracting things down to their geometric essence.

De Stijl was in part a result of the Netherlands’ non-participation in the First World War, isolating Dutch artists from Paris, then the cultural capital of the world. Van Doesburg sought to counter this isolation by starting an art magazine and art movement, inspired by the cubism that was making (square-shaped) waves in the wider art world. At first, the group’s neo-plasticism was expressed in manifestos rather than in art or architecture, but over time, its ideas would exert considerable influence on people like Mies van der Rohe and Rietveld, and more broadly on the course of 20th century art and architecture in the Netherlands and beyond.

This map of Leyden, in the style of De Stijl, was made by Jos Agasi in 2007, the 90th anniversary year of the movement’s founding. “The map was originally made for a project by RAP Architectuurcentrum here in Leyden,” writes Mr Agasi. “In 2008, together with Sanne Dresmé, I organised the project `U bevindt zich hier – Een reis door Leiden in 80 kaarten` (`You are here – A voyage through Leyden in 80 maps`). That project also featured this De Stijl map, which I subtitled: `Design for a stained glass window in Leyden city hall`, hoping the city might find it a nice idea. I made a sketch on my site of how it would look. Who knows, one day it will come true.”

“I was inspired by works by Theo van Doesburg, who lived in Leyden from 1916 to 1920. My map is a homage to his work, which I admire greatly. The map started out as a graphic exercise: I was curious to find out whether it would be possible to ‘translate’ Leyden city centre to a map, using only vertical, horizontal and diagonal lines. I managed to do it — all the streets and alleyways in Leyden are on the map!”

Many thanks to Mr Agasi for allowing me to use his map.