Ciudad Evita is perhaps the world’s weirdest marriage of urban planning and personality cult. Evita City was founded in 1947 by Argentinian President Juan Domingo Peron. By Presidential Decree No. 33221, he willed into existence this new suburb of Argentinia’s capital city Buenos Aires.

Not only was this suburb named after his wife Eva (‘Evita’) Peron, it was also shaped to resemble her profile. This map was sent in by Sergio Balbin, who is a current resident of Ciudad Evita: “Your recent post about the Southern Ontario Elephant (#340) brought to mind the place where I live. Ciudad Evita was founded by Peron for the working class. If you see the map, you will notice Eva Peron’s profile in it. It clearly shows Evita’s classic bun (…) Of course this wasn’t a coincidence.”

Maria Eva Duarte, born out of wedlock in 1919, pursued a career in acting until she met and married Colonel Juan Peron in 1945. One year later, ‘Evita’ (literally Little Eva) became Argentina’s First Lady when Peron was elected president. To say she got involved in her husband’s presidency would be putting it mildly. Evita ran the Health and Labour ministries, the Eva Peron Foundation, and the Female Peronist Party. 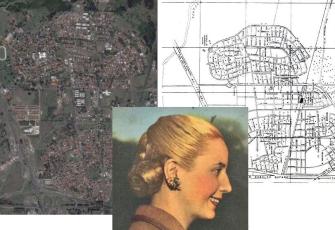 In 1951, her candidacy for the vice-presidency received enthusiastic support from the lower classes, but was opposed by Argentina’s military and economic elite. She died in 1952, after the Argentine Congress bestowed the title Spiritual Leader of the Nation on her. In the years since, ‘Evita’ has become an icon in Argentina and beyond, as the subject of biographies, movies and – perhaps most famously – a musical.

Many thanks to Mr Balbin for sending in this map.