“America’s continental divide is known worldwide. However, nobody ever considers the presence of a European’s continental divide. While for America the subdivision seems more obvious (Atlantic and Pacific coasts, though nobody ever talks about the Pacific and Arctic divide!), in Europe the subdivision might be between the two largest water bodies bordering the subcontinent: Atlantic and Mediterranean Europe.” 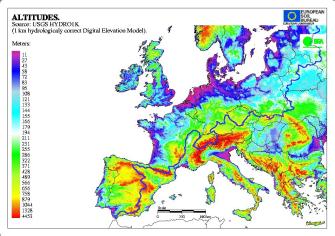