Almost a century and a half after Orélie-Antoine de Tounens assumed the title of King of Araucania-Patagonia, his descendants still lay claim to the throne of that forgotten monarchy at the southern tip of South America.

The website that maintains a flicker of hope for Araucania-Patagonian independence states that De Tounens, a French lawyer, was crowned King by the native Mapuche (or Araucana) Indians. This sounds a bit on the self-serving side of far-fetched, considering the Mapuche’s long history of violent and successful resistance to foreign domination of any kind, be it Inca, Spanish or Chilean.

Especially since King Orélie-Antoine I, when exiled to Paris by the Chilean government, made no bones of referring to his distant and rather inhospitable realm as la Nouvelle France, to drum up support for his cause and convince enough of his countrymen to become colonists in the new state.

Surely, the Mapuche would have minded French dominion about as much as they objected to Chilean supremacy. Only at the time, the former seemed less likely than the latter, which is what the Mapuche must have thought, if the crowning of the Frenchman was entirely their idea.

The Kingdom of Araucania-Patagonia was proclaimed on 17 November 1860 to comprise the Mapuche tribal areas south of the Rio Biobio in Chile. Four days later, the new King extended his claim to include all lands south of the Rio Negro in Argentina, all the way down to the Straits of Magellan. 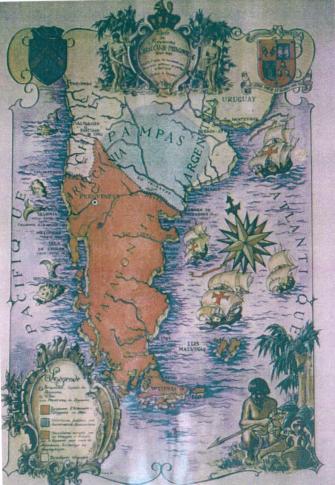 The Kingdom’s first and only resident monarch established his capital at the town of Perquenco, from where he was chased by a Chilean military expedition that eventually led to the pacification, occupation and annexation of Araucania.

After his expulsion in 1862, the King mounted three unsuccessful expeditions to reclaim his throne, and died in France in 1878. The kingdom has been a geopolitical chimera ever since. For a very brief moment in 1984 (and again in 1998), the Kingdom regained actual physical form when a man named Jean Raspail (1) floated the Royal Araucania-Patagonian flag over Les Minquiers, a small archipelago in the English Channel. Formally part of the British-ruled Channel Islands, he proclaimed them to be la Patagonie septentrionale (‘Northern Patagonia’).

Araucania-Patagonia was never recognised by any other nation, but that has not given the the royal family cause to relinquish its claim to the throne. To this day, there is a pretender – Antoine the Fourth of Araucania, a veteran of the French war in Algeria and a retired educator. Chances of his ever wielding the sceptre over an antipodean version of Québec are very small indeed, for, in the words of Bruce Chatwin, Araucania-Patagonia “belongs more to the obsessions of bourgeois France than to the politics of South America”.

Many thanks to Diego Carando for pointing out the website www.araucania.org, which contains this map of the Kingdom here.