Nobody had ever heard of San Serriffe before April 1, 1977, when the Guardian published a special 7-page supplement on the 10th anniversary of that nation’s independence from Britain.

The archipelago was discovered by the English in 1421, colonised by the Spanish and Portuguese and later annexed by the British, ceded to the Portuguese and later for some time a condominium between the latter two nations. San Serriffe gained its independence in 1967. It took the independent nation 20 years of military rule (mainly by a general Pica) before it managed to elect its first civilian president, A. Bourgeois, in 1997.

San Serriffe’s exact location is a matter of dispute. It has been situated in the neighbourhood of the Seychelles, but it appears the island nation drifts as much as 1.4 km per year. Even this astonishing speed does not account for sightings of the archipelago in places as far-flung as the Bering Sea and  just off New Zealand’s South Island. 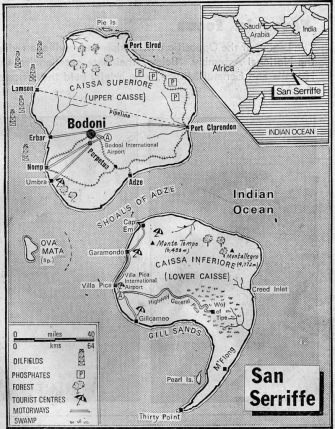 The country consists of two main islands, Caissa Superiore (Upper Caisse) and Caissa Inferiore (Lower Caisse), the latter of which has a prominent promontory, ending at Thirty Point. The islands are separated by the Shoals of Adze. The capital city, located on Upper Caisse, is the city of Bodoni. Other cities are Port Clarendon, Garamondo and Cap Em. The nearby island of Ova Mata is a Spanish possession.

San Serriffe is, of course, not real. The country was one of the Guardian‘s most elaborate, and most successful April Fool’s pranks, and was ‘revisited’ by the newspaper in 1978, 1980 and 1999. One clue to its non-existence are the many references to typography, in its name (sans-serif is a letterform without the serif, which is the small line attached to the end of a stroke in a letter or symbol), its shape (a semicolon) and its cities (Bodoni is a the name of a series of typefaces of the serif type). An even more obvious clue was that an alternate name for the main island was Hoaxe.

The idea for San Serriffe came from Philip Davies, then in charge of the Guardian‘s Special Reports department. “The Financial Times was always doing special reports on little countries I’d never heard of. I was thinking about April Fool’s Day 1977 and I thought: Why don’t we just make a country up?”

Many thanks to D. Zasoba for providing this link to a map of San Serriffe. More on its ‘history’ on this page of the Museum of Hoaxes.

Some scientists see religion as a threat to the scientific method that should be resisted. But faith “is really asking a different set of questions,” says Collins.
▸
5 min
—
with
Francis Collins
Up Next
Strange Maps