Out of a total of 443 Danish islands, only 76 are permanently inhabited. Elleore occupies a special place among them: it is uninhabited for most of the year, and it secedes from Denmark for the few days of the year that it is.

Until 1944 Elleore, a small (15,000 m2) island in Roskilde Fjord (1) shaped like a pregnant boomerang, was known to contemporary Danes only as the setting for one of Denmark’s early movies: Løvejagten på Elleore (‘Lion Hunt on Elleore’, 1907).

Lions are far from indigenous to any part of Denmark, but placing them on Elleore was prescient, the lion being a standard of regalia. For in 1944, right under the noses of the German occupiers, a group of Copenhagen schoolteachers acquired Elleore for use as a summer retreat, and proclaimed its independence.

A daring parody in wartime, the tongue-in-cheek Kingdom of Elleore survives to this day, having acquired a number of extra quirks along the way, including a ban on the novel Robinson Crusoe, the artificial Interlingua as an official language, and something called Elleore Standard Time, 12 minutes ahead of the clocks in Copenhagen. 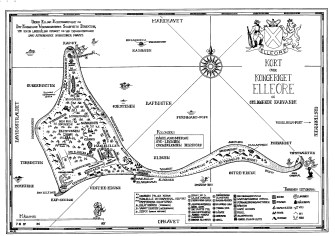 Like the sleeping beauty of the fairytale, Elleore remains dormant for most of the year, only waking for Elleuge (‘Elle-week’), when its ‘citizens’ travel to the island (2) to crown the reigning monarch (currently Leo, the third of that name and the sixth since Erik, who reigned from 1945 to 1949).

The royal website for Elleore – which describes the kingdom as ‘the fourth-largest monarchy in the Nordic region’ – announced a special treat for its citizens, on the occasion of the 100th anniversary of Løvejagten: the first ever movie made by the national film company, a 11 minute documentary (fiction or fact, your choice), entitled Kongen & Dronningen vender hjem (‘The King and Queen return home’).

This map, also taken from the Kingdom’s official website, details the island and surrounding waters with terms that appear humourous (e.g. Cape Carneval, the island’s eastern tip) but might prove elusive to non-Danish-speakers.

(1) the firth of Roskilde

(2) the trip from the mainland takes 17 minutes by rowboat