This map started popping up after the 2004 Presidential election in the US, when George W. Bush got re-elected (with a clear majority this time). Democratic challenger John F. Kerry only won a handful of states, mainly on both coasts – where the electorate is more liberal-leaning than in the more rural ‘flyover’ states in the middle. This map demonstrates the depth of the political divide between both sides. 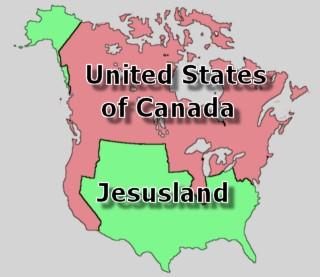 This map can be found all over the internet. I lifted it off a blog called beancounters.