In this day and age, cases of cannibalism are quite rare (or medium, or well done – sorry couldn’t resist that one). The barrage of media attention unleashed whenever a case does occur speaks volumes of our fascination with this, one of the darker taboos of humanity. More often than not, these cases are enshrined in popular culture by the movies and books about them that are avariciously devoured by a sensation-hungry public.

Two instances immediately come to mind: the story of Armin Meiwes, the German internet cannibal, who in 2001 sollicited (and, incredibly, found) a victim online, prepared to be prepared into a meal by him; an example of collective cannibalism (and a case more inspired by necessity than depravity) was that of the Uruguayan plane that crashed high in the Andes somewhere in the 1970s, forcing its survivors to tuck into flesh of the deceased.

The word ‘cannibalism’ derives from a Spanish term for the inhabitants of  the Caribbean, whom they considered to be man-eating savages (the name of the bad guy in Shakespeare’s The Tempest also derives from the same root: Caliban). Another, less popular term is anthropophagy, Greek for ‘the eating of humans’.

Cannibalism is believed to have been practised by the Neanderthals and, in a more or less ritualistic context, by many ancient (modern) human cultures the world over. The object of the practice seems not to have been hunger so much as power – eating others is the ultimate way of establishing dominance over them, and/or acquiring their strength. 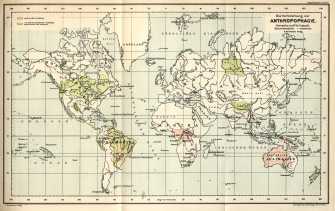 This map, from the German/Austrian publisher A. Hartleben, dating from the early 20th century by the look of it, presents a map of the range of anthropophagy, both contemporary (in red) and historical (in yellow).

Remarkably, Europe is completely cannibal-free. Are there really no historical records of anthropophagy in Europe’s ancient history?

Africa is marked with some historically cannibalistic tribes (Basuto in Southern Africa, Kakongo in the Congo area, Ashanti and the enigmatically named Flups in Western Africa) as well as a few still active ones, mainly in what was then still deepest, darkest Africa: the Niam Niam (this sounds suspiciously onomatopeic), Kissama, Mangbattu and Manyonoa; further south are the Matabele of present-day Zimbabwe.

The whole of Asia is blighted only by the past sins of the Ostiaks, a Siberian tribe and – bet the Dalai Lama never brags about this – the Tibetans.

Indonesia, Micronesia and the rest of Oceania are marked by many contemporary instances of cannibalism, in Australia, New Guinea, Borneo (Dayaks) and Sumatra (Bataks). Maori cannibalism has been stamped out in New Zealand and many (but not all) of the archipelagos to its north.

Anthropophagy was shockingly widespread in North America (according to this map at least), with a continuous swathe of territory marked by the practice, ranging from the east coast (Algonquins, Iroquois) through the Midwest (Chippeway, Dakota) to the west coast (Oregon peoples). Other areas were to be found in Texas (Apache), Louisiane (Atacapa) and Florida.

Cannibalism also was a well-established practice in Mesoamerica (Aztecs, Mayas) and South America (Caribs, Quechua, Tupi) and still ongoing with some Brazilian tribes, notably the Guarani.

It should be remembered that cannibalism probably was over-reported – people in previous centuries being as fascinated by the taboo as we are – and often used as a propaganda tool: cannibalism providing the ultimate yardstick for barbarity, and the ideal excuse to subjugate the peoples accused of it.

Many thanks to Jeremy Schein for providing this map, found here on Wikipedia.

Related
Starts With A Bang
The path forward for astronomers and native Hawaiians
A history of injustice and the greatest natural location for ground-based telescopes have long been at odds. Here’s how the healing begins.
Thinking
“Give a f***, actually”: The surprising benefits of being grateful for things you dislike
Radical Emotional Acceptance calls on you to celebrate all of life’s emotions — even the negative ones.
Thinking
Visual thinking: How to understand the inner lives of animals
Humans are good visual thinkers, too, but we tend to privilege verbal thinking.
Strange Maps
The world’s longest straight line connects Portugal to China
It’s nearly 20,000 miles long.
The Past
How the death of alchemy gave birth to modern science
Far from practicing witchcraft, the experimentation of medieval alchemists helped bring about the Scientific Revolution.
Up Next
Strange Maps
Just How Much Land Does the Federal Government Own — and Why?
The rough beauty of the American West seems as far as you can get from the polished corridors of power in Washington DC.