As insolvable problems go, it’s right up there with attempts to square the circle. Try as you might, it is impossible to render a three-dimensional object (the Earth, say) on a two-dimensional surface (a world map) without distortion.

Take for example the Mercator projection, still one of the most widespread ways of depicting the world on a map. Because of its cilindrical projection method, areas near the poles are shown much larger than they actually are. In a Mercator projection, Greenland is about the same size as Africa, while in fact Africa’s area is 14 times that of Greenland’s.

All sorts of other map projections have been devised since Mercator’s (practical because it allowed for rhumb lines – used in nautical navigation – to be drawn as straight lines), but none of them have managed to eliminate completely the distortion inherent in converting 3D to 2D.

Chuck Clark has found a novel way to reduce the distortion, though. The Atlanta architect has long been fascinated by world maps, and has devised a way to produce constant-scale natural boundary world maps. All the continents (and the oceans) are shown in a true scale. But to do the maps justice, you will need a pair of scissors, a bit of folding and some glue… 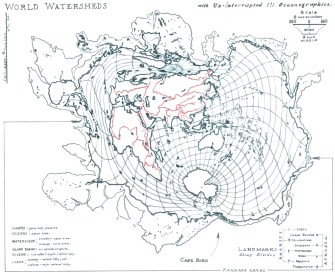 “The art historian Erwin Panofsky (…) called this prototopology, which means merely that the map, when properly folded, resembles the object”, Mr Clark explains on his website.

This prototopological map (constant-scale natural boundary map is even more of a mouthful) of the Earth is an early example of Mr Clark’s csnb maps, and concentrates on the watersheds: the outer edge of the map is constituted by (sub)continental watersheds. For example, north of the rift splitting open Europe, water flows to the Atlantic, south of it, water flows into the Mediterranean.

“What is nice about this map is that at a single glance you see the Earth’s oceans and the lands that drain into them, all in proper proportion, shape and size”, says Mr Clark.