Temperance not only is one of the four Cardinal Virtues of Catholicism and one of the five Precepts of Buddhism, it’s also the name of a specific social and political movement gathering steam throughout the 19th century, mainly in anglophone countries, aiming to reduce and ideally even eliminate the consumption of alcohol.

In the U.S., much of the Temperance Movement was religiously inspired (although by Protestantism rather than Catholicism or Buddhism), and much of it was led by women (such as the Women’s Christian Temperance Union, founded in 1873 and still around today).

The most obvious way to ‘temper’ the consumption of alcohol is not to drink it at all; so the plea for Temperance escalated into demands for Abstinence. Since the personal choice not to drink at all is much easier if there’s no temptation around, the Movement moved inexorably from demanding Temperance through advocating Abstinence to pushing for Prohibition – “an intemperate denunciation of temperate drinking,” as G.K. Chesterton once derisively described it.

Temperance, now in the guise of Prohibition, was spread with a religious zeal bordering on the fanatical. In 1851, Maine became the first Prohibition state; four years later, there were already 12 ‘dry’ states in the U.S. In 1919, the 18th Amendment extended Prohibition to the entire country. Jubilant Temperance zealots were predicting the end of crime, and prepared to promote the benefits of Prohibition in other countries.

But this is where the Temperance wave crested. Far from reducing crime, Prohibition actually gave organised crime a serious boost – e.g. Al Capone and other ‘classic’ American gangsters. Prohibition was not only impopular, but eventually untenable, making the 18th Amendment the only one ever to have been rescinded (in 1933, by the 21st Amendment).

This ‘Map On Temperance’ was printed at Howe’s Sheet Anchors Press in Boston around 1846, thus dating from the ascendancy of the Temperance movement. It shows the straits, bays and channels of the Ocean of Life, which is dotted with islands, provinces, kingdoms, territories and regions. All features are named after aspects of alcoholism (in the West) and of Abstinence (in the East). 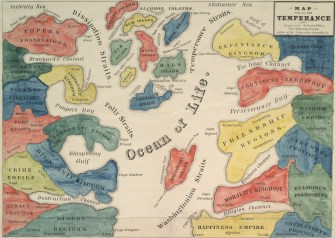 The Alcohol Islands lie in the northern part of the Ocean, separated by Dissipation Straits and Folly Straits from the wicked lands to the West. The islands are: Brandy Island, Rum Island, Cider Island, Wine Island, Malt Island, Gin Island, Whiskey Island and Cordial Island. Other features on or between these islands are: Rum Sellers Shoals, Temptation Straits, Cape Ale, and, towards the gloriously alcohol-free lands to the East, Moderation Passage and Temperance Straits.

The lands of drink are, north to south: Topers Possession, Sickness Province, Indolence Kingdom, Poverty Territory, Fury Region, Reprobate Empire, Dishonesty Kingdom, Crime Empire, Lunacy Province and Misery Regions. Each territory contains toponyms associated with each of the defects described by their name. The Misery Regions are dotted with Infamy, Ruin, Woe and Horror; Hatred, Malice and Revenge are contained in the Fury Region; and Sloth, Indigence and Lazy Harbour (where many of us let down anchor from time to time) can be found in Indolence Kingdom.

Drifting in the southern Ocean of Life, almost as if it were on a mission due west is – yep – Missionary Island, with a Persuasion Bay and an Exhortation Coast. Between the island and the dry land are the Washingtonian Straits, possibly a reference to the DC politicians still needing to be convinced of the benefits of Temperance legislation. 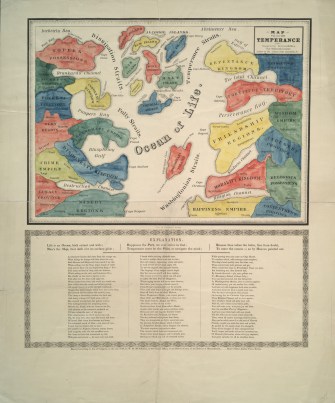 Below the actual map is a rhyming road map explaining the route from the perilous ‘wet’ lands to the blessed ‘dry’ lands. An Explanation crowns the whole simile between map and life:

Life is an Ocean, both extant and wide; Man’s the Ship, that doth o’er its surface glide; Happiness the Port, we ever strive to find; Temperance must be the Pilot, to navigate the mind; Reason then takes the helm, free from doubt, To steer the course – as by Heaven pointed out.

The road map rhymes Rum-seller’s Shoals with the “countless souls” wrecked and ruined by that place, and says:

I found whole cruising Alcoholic seas, In such a seafare there is no rest or ease; But with misery, oppression, crime and strife, Is such servile service most amply rife.

This map was sent in by Natalia Fisher and can be found on this page at Brown University in Providence (RI).

Good culture is more than just liking each other. Here’s the key way to build great culture at work.
▸
3 min
—
with
Alisa Cohn
The Well