Switzerland is predominantly German-speaking, but far from completely so. The alpine confederation is officially quadrilingual: German (64%), French (20%), Italian (7%) and Romansh (0.5%). As the latter two languages are very minoritary, linguistic tension does tend to be a binary thing, between Deutschschweiz – a word only a germanophone could pronounce – and la Romandie, signifying the Swiss French west of the country.

The Romands call the ‘other’ side la Suisse alémannique and the Schweizerdeutsche call the francophone part of their country Welschschweiz (the root word being a Germanic term for ‘stranger’, identical to the one in ‘Wales’ and ‘Wallonia’).

The language border dividing these two areas is known jestingly as the Röstigraben (in German) or the rideau de rösti (in French). A Graben is a ditch and a rideau is a curtain, so you get the idea of separation – but what a Rösti is and why it is significant, requires a bit more explanation.

This dish is made mainly by frying grated potatoes in a pan. It was formerly eaten as breakfast by farmers in the (German-speaking) Bern canton. The original conceit of the Röstigraben was that it constituted the western limit of the German Swiss culture, beyond which people spoke (and ate) differently. 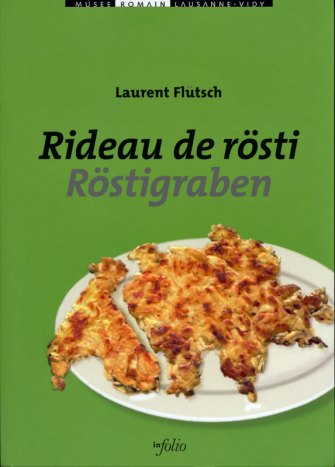 The Rösti has gained popularity as a side dish all over Switzerland, but the language and cultural differences persist. The French Swiss voters have traditionally been less averse of the international community (including potential EU membership) and more prone to support a more active role for the federal government. Recently, voting trends in French and German Switzerland have tended to converge more.

The Röstigraben isn’t the only gastronomically defined cultural border in central Europe. The northern and southern halves of Germany are separated by what is called the Weisswurstäquator – the white sausage equator, after a favourite dish in Bavaria that’s rarely eaten in the north (see #569).

The book cover used here shows a picture of a very literal Röstigraben – a Switzerland-shaped Rösti broken in two exactly where the language border runs. That the ditch wasn’t too hard to cross, is apparent by the author’s French forename and German surname. More on the book here.