Just as light is not supposed to bend, so the Equator should not waver from its rectitude. The fact that it snakes across this map like a hose through a garden indicates that this is a very weird world indeed.

How weird? A first indication is the size of Alaska – way too big even considering the Mercator projection, which is also ballooning Russia to a size much bigger than its already huge actual surface, but this super-sized Russia does not seem too much out of line with accepted mercatorial deviance.

But there are plenty of other things very wrong with this map. Closer inspection of the American continent reveals a gigantic Labrador, bordering on Mexico, to which is appended an atrophied version of South America. Not just atrophied, but completely missing are the United States and Canada (not to mention all other Central and South American countries, save Peru, which takes up all of its subcontinent).

Two para-American islands are affected by gigantism: Easter Island, which looks like a teddy bear pointing towards Peru, and Tierra del Fuego, at the southern tip of the Americas, looking like a lizard running west. 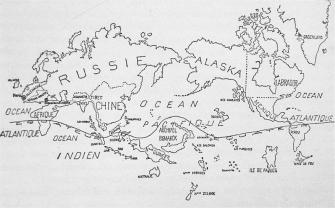 Asia and Oceania are similarly blighted by gigantism (Hebrides, New Guinea and an illegible archipel, China and Afghanistan) dwarfism (Australia, India) and not-there-ism (Japan, Sri Lanka, much of the Middle East).

Africa is tiny, Europe is almost entirely covered by Germany, Ireland is looking straight at Europe across the Britain-less North Sea. Only two cities are marked on the map: Paris and Constantinople…

What’s the point of this map? Well – its point is that it hasn’t any, except to bewilder and shock bourgeois viewers by presenting a bizarre alternative to the stale normality of their expectations. Which is a neat summary of the surrealist world view – not co-incidentally, the title of this work is Surrealist Map of the World. It first appeared in 1929 in a special issue of Variétés, a Belgian magazine dedicated to surrealism – an art movement producing almost as many manifestos as actual artworks, but remembered today more for its absurdity than for its politics.

In discussing this map in her excellent book You Are Here, Katharine Harmon quotes a Surrealist manifesto from 1925:

“Even more than patriotism – which is a quite commonplace sort of hysteria, though emptier and shorter-lived than most – we are disgusted by the idea of belonging to a country at all, which is the most bestial and least philosophic of the concepts to which we are all subjected.. Wherever Western civilisation is dominant, all human contact has disappeared, except contact from which money can be made – payment in hard cash.”

Could the disappearance of the U.S. and Britain from the map signal the desire to return to that pre-civilised, cashless, contact-rich world? Perhaps surrealism was not as bizarre as we remember, and more political than we give it credit for.

This map was found here.