In 1833, The United States didn’t have an East Coast yet, for lack of a West Coast. The gigantic Louisiana Territory, acquired some 30 years earlier from the French, gave America dominion over the Mississippi basin, but Mexican land and the Oregon territory, claimed by Great Britain, still stood between the US and its ‘Manifest Destiny‘ – to stretch “from sea to shining sea”.

That’s a line from Katharine Lee Bates’ song ‘America the Beautiful‘, composed in 1893 when the west was won, mainly by the Mexican-American War of 1846-’48. It would be many decades before all the lands between Mississippi and Pacific would enter the Union as full-fledged states, but the iconic shape of America’s lower 48 states was there.

In 1833, other icons were still vying for public acknowledgement. For example, this Eagle Map of the United States, Engraved For Rudiments of National Knowledge. 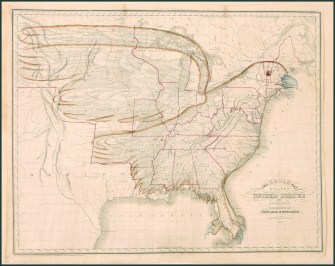 The map represents America as an eagle (it looks more like a dove), with its head coinciding with New England (except Maine), its eye with Vermont, its neckline following Lakes Ontario and Erie, the wing outlines Lakes Huron and Superior (and further west the eventual Canadian-American border at the 49th parallel).

The eagle’s breast follows the Atlantic seaboard, its talons form Florida – even though the claws protrude far from the coastline, and somewhat ominously, towards Cuba.

The real reason why this particular iconic representation of America’s national bird never caught on, is in the tailfeathers – shaped to follow a border no longer in existence by 1848. The western borders of the subsequent independent and later US state of Texas are recognisable, for now as the dividing line between the US and Mexico. The feathers follow the US inland border as it moves north, and disappears out of sight at the area disputed with Great Britain.

Meanwhile, the great inland empire of Louisiana is already being divided up into US states, with Louisiana and Missouri separated from the ‘mainland’ of the formerly French lands.

This map was published in Philadelphia in 1833 by Carey & Hart, in a now extremely rare atlas, the Rudiments of National Knowledge, Presented To The Youth of the United States, And To Enquiring Foreigners, By A Citizen Of Pennsylvania.

Map sent in by Barry Ruderman.