I don’t know if the old man was having us on, but he said he was a funerary historian, researching the Père Lachaise cemetery. We were walking and talking in the same streaming rain that was washing away the lipstick traces off the Oscar Wilde monument and chilling us to the bone. “That little temple,” he pointed to a remarkably non-derelict, almost house-sized funerary chapel, “belongs to a descendant of Count Dracula”.

I’m quite sure you won’t find that relative of Vlad the Impaler on this map – unless under an assumed name; but this is an otherwise comprehensive overview of the most notable occupants of Paris’ biggest and most famous graveyard (although if you’re into that kind of thing and you are in the City of Lights, the cimetière at Montmartre is also worth a visit). 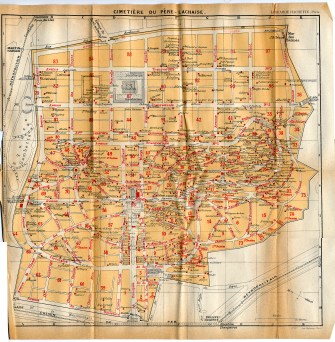 The map numbers the different subsections of Père Lachaise and highlights, in red, its most celebrated occupants – although the celebrity of many has not survived their death by much. Anyone ever heard of Monsieur ou Madame Ferko-Patikarus (65)? Or of Dr E. Reliquet (96)? Some names, however, do still resonate today. How about: •Héloise and Abélard, the tragic medieval lovers, finally together in their very own tombe à deux? (7, near the Jewish section); •Composers Rossini (4) and Bizet (68); •The Egyptologist Champollion, the (somewhat disputed) decipherer of the Rosetta Stone (18); •The illustrator Gustave Doré (22).

As far as I can tell, the map is undated; but it certainly looks like it’s pre-World War II, maybe even pre-World War I. Although Doors frontman Jim Morrison is buried at Père Lachaise, it’s therefore unlikely he is the Morrison mentioned in section 68.

An intriguing label is that of the Victimes de l’Opéra-comique (96; possibly the last sustained attempt at French comedy). Most of the other names are complete mysteries as well; please feel free, if you recognise anyone, to offer some biographical data, which, ultimately, might help in determining the map’s age.

This map was found here.