All was not well in Europe in 1870, the year the Franco-Prussian war would lead to a united German Empire and a humiliated France; one could call it the first of three European civil wars, the other two being World Wars One and Two.

This French satirical cartoon map (‘Carte drôlatique d’Europe pour 1870‘) sought to get some laughs out of those tensions by showing an anthropomorphic map of Europe, where each country was represented by a caricature of its national ‘persona’. 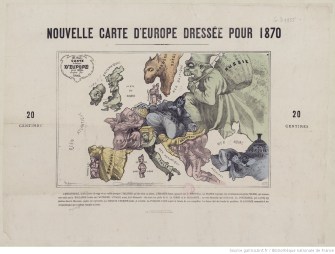 • Prussia, made to look like its walrus-bearded ‘Iron Chancellor’ Otto von Bismarck, is haranguing its neighbours: kneeling on Austria, a sleeping soldier in undress; covering the Netherlands with its right hand. • France, dressed as a fierce zouave soldier, is aiming a bayonet at the heart of the unwieldy Prussian military monster. • Belgium, too small to be anthropomorphised, is being squeezed between France and Prussia (which would become its familiar, if uncomfortable lot in the First and Second World Wars). • England is an old woman, struggling with Ireland, her rebellious lapdog on a leash (although it looks more like a small bear); Scotland is the old lady’s mobcap. • Spain is a rotund senorita, smoking the day away while lying on her back and thus nearly crushing the small Portuguese soldier under her. • Corsica and Sardinia are joined to show a leprechaun-like figure gleefully mooning the map-reader. • Italy, possibly made to look like the great national leader Garibaldi, is holding off pressure from Prussia. • Denmark is a small, swaggering soldier, no doubt hoping to recover the territory it lost to Prussia in a war a few years earlier. • Norway and Sweden together are turned into a ferocious dog. • Switzerland is a closed cottage. • Turkey in Europe is “an Oriental crushed by the superincumbent pressure of the other countries”. • Turkey in Asia is a girl smoking a hookah pipe. • Russia is a rag-collector in a patched coat, ‘Crimea’ written on the patch sewn on last.

The Degrees of Longitude at the bottom of the map are measured in rifle-lengths – another comment on the explosive military situation.

This map was obviously drawn before the outbreak of the Franco-Prussian war in July. Its author is mentioned as Hadol; Paul Hadol was a French illustrator and caricaturist, also publishing under the pseudonym ‘White’. He was one of the exponents of France’s Golden Age of Caricaturism in the mid-19th century.

In a sad irony, seeing that war was so imminent, most Europeans were able to agree that this was a funny map. It was republished in Germany, Great Britain and the Netherlands. 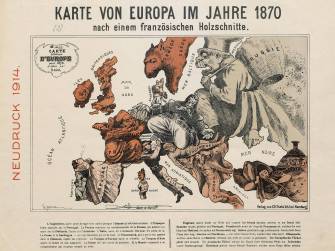 German reprint of the French original, republished in 1914, when war was again approaching

A link to this map was sent to me by Marc da Costa, who found it at Bibliodyssey, a delightful blog on Books, Illustrations, Science, History, Visual Materia Obscura, Eclectic Bookart. This copy of the Hadol map found here at the Bibliotheque nationale de France.

A Map of Greater China, Made in Taiwan

Taiwan – officially: the Republic of China – claims territories of ten of China’s neighbours