As rivers go, the Mississippi is one of the world’s biggies. It’s 3.734 km (2.320 mi) long and has a watershed of more than 3.2 million sq. km (1,245,000 sq. mi), the third-largest in the world, preceded only by the Amazon and Congo rivers. The Mississippi watershed drains 41% of the 48 contiguous states, and even a bit of Canada as well. By volume, it’s the fifth-largest river in the world. And yet, the Mississippi isn’t even North America’s longest river: that is the Missouri River.

The western border of the Mississippi’s catchment area corresponds almost entirely with the border of the former French territory of Louisiana, indicating that the watershed boundary was chosen as the basis for that territory’s borders.

Water flowing out from its headwaters at Lake Itasca in Minnesota will take 90 days to reach its estuary into the Gulf of Mexico at Baton Rouge in Louisiana. In, 2002, Slovenian long-distance swimmer Martin Strel covered that same distance in 68 days, so only doing 22 days’ net worth of swimming – the lazy slacker.

The Mississippi was named by the Ojibwe, who appropriately called it the ‘Great River’ (misi-ziibi). Nowadays, it flows through two US states and forms the border of eight others; although the river has shifted in many places, the borders have not, leading to geo-political anomalies (see post #178 on the Kentucky Bend, one of several such peculiarities ‘marooned’ by the river).

When looking at this map and seeing the jumble of ancient riverbeds – imagine all those shifts sped up: the Mississippi is like a shifting snake, twisting to find its easiest way down to the Gulf. These shifts occur every thousand years or so, especially in the lower parts of the river, through a process known as avulsion, or delta switching: when the river flow is slow, the sedimentation clogs the river channel and it eventually finds another channel. This process is by no means over – from the 1950s onwards, the US government has worked on the Old River Control Structure, meant to prevent the Mississippi from switching to the Atchafalaya River channel. 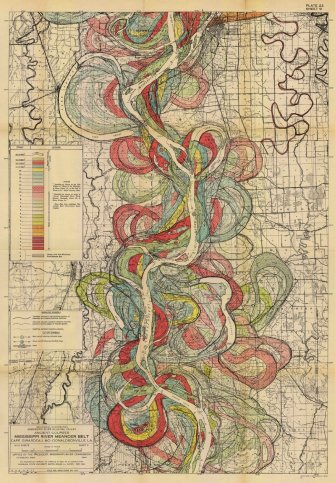 Some other interesting Mississippi facts:

“Looks like a spaghetti dinner brought to you by Crayola,”says Joseph Kinyon of the map he sent in. It’s one of many by Harold N. Fisk, an important figure in charting alluvial maps of the Lower Mississippi Valley.

How Iran Could Claim a Slice of Antarctica

If the principle of frontage would be universally applied, so could the U.S., Nigeria, Bangladesh – and even Greenland