Before his death, a group of scholars associated with him had come up with a plan to re-arrange the volatile Double Monarchy into a United States of Greater Austria. This specific plan was proposed by Aurel Popovici in 1906. What if he had not been killed, and had been able to push through this kind of reform? Would Austro-Hungary have become a more stable state, and perhaps still be around today?

Prior to World War One, Austro-Hungary was unstable because, as a multi-ethnic state, it was dominated by only two out of its main eleven nationalities – Germans and Hungarians, totalling 44% of the entire population. Each of these two nationalities controlled roughly one half of the Double Monarchy. Revolts and resistance by the other nine nationalities made this situation untenable.

Franz Ferdinand wanted to re-draw the map of his country into a number of states that would be as ethnically and linguistically uniform as possible. These would be supplemented by small autonomous areas, mainly German-speaking ‘islands’, for example in the south of Hungary. The states in Popovici’s plan were defined as:

The borders don’t completely correspond to those of today, but some of the nations that would eventually appear after the First World War are prefigured quite accurately, especially Austria, Hungary, Slovenia and Croatia. 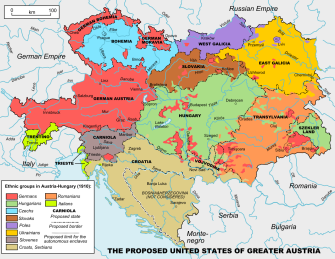 More information (and this map) on this Wikipedia page.

Scientists ranked countries on their end-of-life care. The U.S. fared poorly.
Up Next
Strange Maps