In 1900, the famous French writer of adventure stories Jules Verne published Seconde Patrie (‘Second Fatherland’) in two parts. Like many works at the end of his life, this adventure story was a revisiting of earlier work, though in this case not Verne’s own. Seconde Patrie is a sequel to a well-known book by Johann David Wyss: Der schweizerische Robinson (‘The Swiss Family Robinson’).

Wyss was a Swiss pastor, who wrote this Christian morality story disguised as an adventure novel to teach his four sons about family values, self-reliance and good husbandry. It tells of a shipwrecked Swiss family’s survival on an island in the Indian ocean. The family is not called Robinson, by the way; that’s a reference to the earlier, equally fictional Robinson Crusoë, probably still the most famous shipwreck, fictional or otherwise.

Verne’s book revisits the original shipwreck, and the Swiss family’s final years on the original island. Unnamed in the original, the family is called Zermatt in Verne’s book. The Zermatts have been joined by Jenny, a girl stranded by a different shipwreck and rescued by the Zermatt boys, and the English family Wolston. Aided by the engineering skills of Mr Wolston, the islanders set about to further taming their new home, dubbed ‘New Switzerland’.

Further adventures ensue, with plenty of unfriendly natives, sea-travel and shipwrecks. In the end, the island is annexed by Great Britain and the flourishing colony soon has over 2,000 inhabitants. This map (in French, but with some place names in German and English) shows the shape, names some features and indicates the settlements on Nouvelle Suisse.

Situated in the Indian Ocean, the island boast five bays:

A small area at the north side of the island, protected by an encircling mountain range, is named Terre Promise (the Promised Land). There, five settlements are named:

The interior of New Switzerland is dominated by a single mountain top, the Pic Jean Zermatt (Mount John Zermatt). A small inset shows the Promised Land in greater detail: 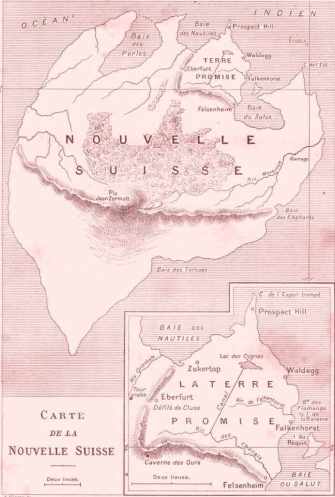