In 1911, Czech historian Konstantin Jireček drew a line across a map of the Balkan peninsula. The line, running east-west from the Adriatic Sea to the Black Sea, through northern Albania, along the Macedonian-Serbian border, and straight through the middle of Bulgaria, was an imaginary demarcation based on archaeological findings. 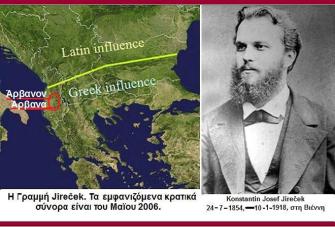 To the north, Latin was the dominant language. To the south, Greek dominated. This situation became more fluid after the collapse of the Western half of the Roman empire in the 5th century, eventually leading to the diminishing of Latin’s influence – although it did lead to the creation of Romanian, the only large romance language group of Eastern Europe.

Maps found here on wikipedia and here at Tsoutsouneros.