Middle-earth. J.R.R. Tolkien’s invented mythology centered on an epic story of the struggle between Good and Evil, but it also included an elaborate backstory, a complex of languages, genealogies, cultures and peoples – and a map.

Created by Tolkien somewhere in the 1930s, the map shows the ‘mortal lands’ of Middle-earth, which according to Tolkien himself is part of our own Earth, but in a previous, mythical era. At the time of the events described in ‘The Hobbit’ and ‘The Lord of the Rings’, Middle-earth is moving towards the end of its Third Age, about 6.000 years ago.

Tolkien didn’t create Middle-earth ex nihilo: ancient Germanic myths divide the Universe in nine worlds, inhabited by elves, dwarves, giants, etc. The world of men is the one in the middle, called Midgard, Middenheim or Middle-earth. That term doesn’t thus describe the entirety of the world Tolkien thought up. The correct term for the total world is Arda – probably derived from German Erde (‘Earth’) and only first mentioned posthumously in the Silmarillion (1977); and Eä (for the whole Universe). 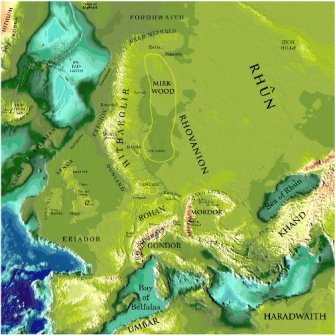 The Hobbits are described as inhabiting ‘the North-West of the Old World, east of the Sea’, and therefore it’s tempting to associate their home with Tolkien’s own, England. Yet, Tolkien himself wrote that ‘as for the shape of the world of the Third Age, I am afraid that was devised ‘dramatically’, rather than geologically, or paleontologically.” Elsewhere, Tolkien does admit “The ‘Shire’ is based on rural England, and not any other country in the world.”

But, as Tolkien states in the prologue to ‘The Lord of the Rings’, it would be fruitless to look for geographical correspondences, as “Those days, the Third Age of Middle-earth, are now long past, and the shape of all lands has been changed…” And yet, that’s exactly what Peter Bird attempts with the map here shown. Bird, a professor of Geophysics and Geology at UCLA, has overlapped the map of Middle-earth with one of Europe, which leads to following locations:

•The Shire is in the South-West of England, which further north is also home to the Old Forest (Yorkshire?), the Barrow Downs (north of England), the city of Bree (at or near Newcastle-upon-Tyne) and Amon Sul (Scottish Highlands).
•The Grey Havens are situated in Ireland.
•Eriador corresponds with Brittany.
•Helm’s Deep is near the Franco-German-Swiss border tripoint, close to the city of Basel.
•The mountain chain of Ered Nimrais is the Alps.
•Gondor corresponds with the northern Italian plains, extended towards the unsubmerged Adriatic Sea.
•Mordor is situated in Transylvania, with Mount Doom in Romania (probably), Minas Morgul in Hungary (approximately) and Minas Tirith in Austria (sort of).
•Rohan is in southern Germany, with Edoras at the foot of the Bavarian Alps. Also in Germany, but to the north, near present-day Hamburg, is Isengard. Close by is the forest of Fangorn.
•To the north is Mirkwood, further east are Rhovanion and the wastes of Rhûn, close to the Ural mountains.
•The Sea of Rhûn corresponds to the Black Sea.
•Khand is Turkey
•Haradwaith is the eastern part of North Africa, Umbar corresponds with the Maghreb, the western part of North Africa.
•The Bay of Belfalas is the western part of the Mediterranean.

This map taken here from professor Bird’s page at UCLA.

The problems that Americans face are often too complex for fact-checking alone.
Up Next
Strange Maps