For me, this might be the original strange map. When I was a kid, I had the Spitting Image book that contained this map. I spent hours (well… whole quarters of hours) poring over it, chuckling away every time I ‘got’ a reference. For those who don’t know it, ‘Spitting Image’ was a British satirical tv show in the nineteen eighties, centred around hilariously exaggerated figurines of politicians, entertainers and other celebrities.

It being ‘eighties Britain, the butt of most jokes was the party then in power, the Conservatives (or Tories) and their leader, Margaret Thatcher. The ‘Iron Lady’ was mocked by exaggerating the perceived steeliness of her resolve, compared to which most other figures appeared to be comically weak. Especially her American ally, president Ronald Reagan, who was portrayed as the acme of cluelessness.

This map mocks the supposed world-view of the Tories, who were perceived as being extremely right-wing, unashamedly Anglocentric (even to the detriment of other parts of the UK), overtly racist and romantic about Britain’s imperial past. All of this is reflected on the map, which oversizes (former) British territories, minimizes others and renames quite a few.

Those readers not accustomed to foul-mouthed British invective should avert their eyes now. An overview, starting with Britain itself… 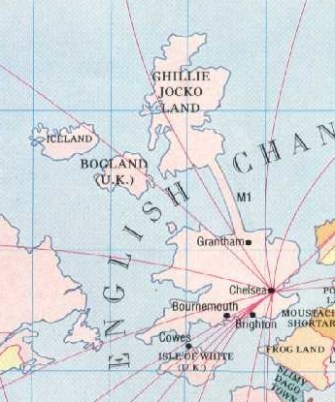 I’ve always wondered how people in the north of Britain (or England, for that matter) deal with the fact that the southeast of England is called the ‘home counties’, implying everywhere else on the island of Britain is somehow foreign. The map illustrates this dichotomy well, in oversizing the south of England (and incidentally the whole of Wales, without naming it), naming Scotland ‘Ghillie Jocko Land’ and connecting the two via the M1 motorway (effectively erasing the rest of England above Grantham). The Isle of Wight is also oversized, Northern Ireland is called ‘Bogland (UK)’ (the Irish republic is below sea level) and Iceland is conveniently British too. 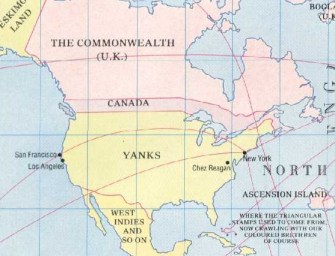 Most of ‘real’ Canada is made up of ‘The Commonwealth (UK)’, leaving only a thin strip for Canada. The US is labelled ‘Yanks’ (with Washington named ‘Chez Reagan’), Alaska is ‘Eskimo Land’. The only label for the whole of Central America and the Caribbean is ‘West Indies and so on’, while ‘British Honduras’ (actually Colombia) is the former colonial name for present-day Belize. ‘Greasy Gaucho Spic Land’ is Brazil (although the gauchos live in Argentina, I thought) and ‘Various darkies, cannibals and huns’ occupy most of the rest of South America – ‘huns’ might be a reference to Nazi fugitives. Argentina gets a mention as ‘Argies’, which is almost correct and probably a badge of honour for having had the guts to invade the Falkland Islands, grossly oversized as they were successfully recaptured by Margaret Thatcher. Other Brititsh Atlantic possessions are also magnified: South Georgia, Tristan da Cunha and Ascension Island (‘Where the triangular stamps used to come from, but now crawling with our coloured brethren, of course’). 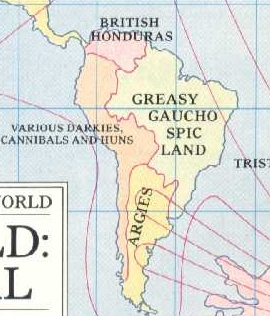 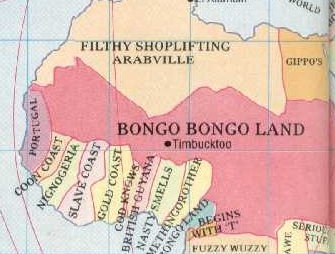 More racism like that in the naming of the Maghreb countries (‘filthy shoplifting Arabville’), Egypt (‘Gippos’), the Sahara and Sahel countries (‘Bongo Bongo Land’) and several of the incorrectly drawn West and Central African nations (‘Coon Coast’, ‘Slave Coast’, ‘Nignogeria’, ‘Nasty Smells’, ‘Begins with T’ and ‘Fuzzy Wuzzy Land’). Exceptions are made for ‘British’ territories such as the neutrally termed ‘British Guyana’ (actually in South America, now the independent country of Guyana) and ‘Kenya‘ (though it is coloured in as an independent country). A huge swathe of Central and Southern Africa is taken up by ‘The Much Maligned South Africa‘, then still an Apartheid state. Two slivers of African coast are termed ‘Portugal’, supposedly in the eyes of Tories a country little better than an African one, and easily mistaken for one. Madagascar, finally, is disinterestedly labelled ‘Borneo?’ 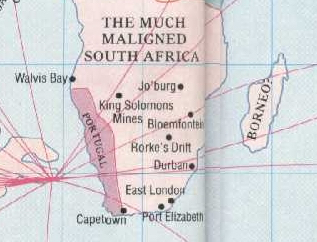 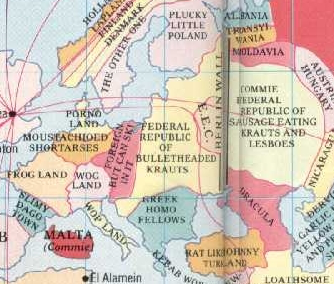 The Scandinavian peninsula is summarily divided between several ‘nordic’ countries, such as ‘Holland’, ‘Lapland’, ‘Finland’, ‘Denmark’, ‘The Other One’ and ‘Plucky Little Poland’.

Where Denmark actually is, ‘Pornoland’ is marked (Holland?), with below ‘Moustachioed Shortarses’ (I don’t know who these are supposed to be), ‘Frog Land’ (actually only half of France), ‘Slimy Dago Town’ (the other half; named after an insulting word for the Spanish) and ‘Gib’ (Gibraltar, occupying the whole Iberian peninsula). Southern Italy is ‘Wop Land’, northern Italy plus Switzerland is ‘Wog Land’ (the difference eludes me), most of the Balkans is called ‘Greek Homo Fellows’ and Eastern Europe is ‘Federal Republic of Bulletheaded Krauts’ (West Germany, actually). The text in the territory to the west is illegible on this map. To the east lie the ‘Commie Federal Republic of Sausage Eating Krauts and Lesboes’ (East Germany) and other communist states such as ‘Nicaragua’, ‘Austria-Hungary’, ‘Moldavia’ and ‘Transylvania’. The biggest country on the map, the Tories’ posturing notwithstanding, is the ‘Union of Soviet Russian Commie Bastards’. 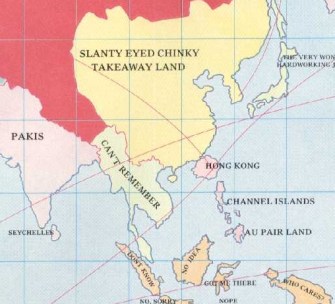 ‘Slanty-Eyed Chinky Takeaway Land’ could have been a name for China thought up by upper-class British anachronisms such as Prince Philip. Japan gets a positive mention as ‘The Wonderful Hardworking Japanese’. Straight above lies the Kamchatka peninsula, incorrectly labelled as ‘Used to Be British, But Gone to the Dogs Now’. Coloured in British pink are an oversized Hong Kong, and the Philippines (labelled ‘Channel Islands’ and ‘Au Pair Land’). Australia is ‘Singapore’, Tasmania is ‘Thingy’. Indonesia is ‘No Idea’, ‘Nope’, ‘Who Cares?’ and so forth. The former British Raj in the Indian subcontinent is labelled ‘Pakis’, while the Middle East rounds out Asia with another ‘Portugal’ (on the southern coast of Arabia, where Yemen and Oman are), and a few other descriptions too nasty and in any case too illegible to reproduce here.

Please be assured that none of the prejudices expressed in this map reflect my own convictions. Except where they refer to the French, of course.  (Je plaisante, bien sûr!) 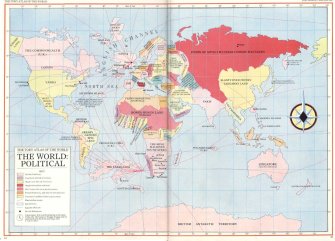 Astrophysicist Michelle Thaller explains how a solar storm could wipe out civilization… and what we can do to prevent catastrophe.
▸
5 min
—
with
Michelle Thaller
Up Next
Strange Maps