While observing a young star system, astronomers noticed the star had a small, mysterious companion in its orbit. 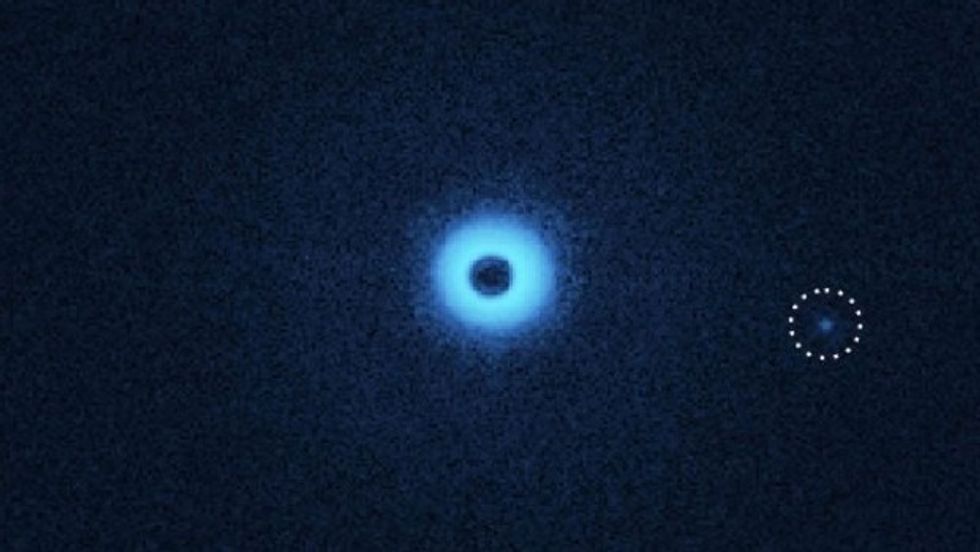 The team, led by Christian Ginski of Leiden Observatory in the Netherlands, was studying a binary system called CS Cha, which is located in a star-forming region in the southern constellation of Chamaeleon. To observe the system, the team used the Spectro-Polarimetric High-contrast Exoplanet Research (SPHERE) instrument, part of the European Southern Observatory's Very Large Telescope (VLT) in Chile.

At just 2 to 3 million years old, CS Cha is a remarkably young star system. It’s at the age where astronomers would expect it to be surrounded by a protoplanetary disc of gas and dust that eventually gives rise to planets. The team was looking for this disc when they noticed in the photographs a small dot around the star.

The dot suggested CS Cha had a companion, one that could be a very young exoplanet. To rule out the possibility that the observation was a glitch, the team looked at two sets of old photographs of the star system–one from the VLT’s NACO instrument 11 years ago, another taken by the Hubble Space Telescope’s Wide Field and Planetary Camera 2 19 years ago.

The dot was observed in both sets. But that doesn’t mean scientists can confirm exactly what the companion is. It could be a brown dwarf, a very low-mass star that’s too small to sustain hydrogen fusion. It could also be a young gas giant in the beginning stages of development—what’s known as a super-Jupiter.

“We suspect that the companion is surrounded by his own dust disk,” Ginski said in a statement. “The tricky part is that the disk blocks a large part of the light, and that is why we can hardly determine the mass of the companion. So, it could be a brown dwarf but also a super-Jupiter in his toddler years. The classical planet-forming-models can't help us.”

Either scenario would amount to a rare discovery, considering the first direct photo of an exoplanet was announced in 2009, and “brown dwarf companions to solar-type stars are extremely rare,” as researcher Michael McElwain of Princeton University told Space.com.

The team’s paper is scheduled to be published in Astronomy & Astrophysics.