Is there a certain spiritual component to hope, supported by a belief in a God that can make goals and dreams come true? Or can an atheist be just as hopeful as a religious person?

Luc Bovens, professor of philosophy at the London School of Economics, has been working in moral psychology for the past 20 years, and says in a video for Big Think that it’s possible to have “secular hope,” even in the face of death. Especially, says Bovens, if you think about hope like a through-line that can make your whole life meaningful. Then the question becomes, “how can you live a worthwhile life even if you think it ends at death?”

Bovens relates an example of a DJ who throws a great party. You can think of the party as just pointless fun with no lasting value. Or you can think of how amazing this admittedly temporary experience was and find purpose in that. 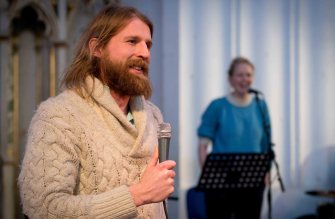 British comedian and white Jesus impersonator Sanderson Jones (L), a co-founder of The Sunday Assembly, an atheist service held at a converted church, leads a service in north London, on March 3, 2013. Echoing with joyful song and with a congregation bent on leading better lives, this London church is like any other — except there’s no mention of God. Britain’s atheist church is barely three months old but it already has more ‘worshippers’ than can fit into its services, while more than 200 non-believers worldwide have contacted organisers to ask how they can set up their own branch. (LEON NEAL/AFP/Getty Images)

He also quotes John Keats, the English romantic poetic, who said while dying of tuberculosis that he was not sure if he left any mark in life but he always lived it “according to an aesthetic principle.” He chose a certain way to live, among many possible options. According to Bovens meaning can be found in living a “particular style of life.”

These thoughts were echoed by Jerry Coyne, an evolutionary biologist, interviewed by Buzzfeed UK in a series on how atheists find meaning in life:

“The way I find meaning is the way that most people find meaning, even religious ones, which is to get pleasure and significance from your job, from your loved ones, from your avocation, art, literature, music,” said Coyne. People like me don’t worry about what it’s all about in a cosmic sense, because we know it isn’t about anything. It’s what we make of this transitory existence that matters.”

Atom Shaha, a physics teacher and author of The Young Atheist’s Handbook, told Buzzfeed UK that it may be better not to look for any meaning at all. What’s more important is to establish lasting connections with people around you.

“Yes, of course I know that life is ultimately without meaning or purpose, but the trick is not to wake up every morning and feel that way,” said Shaha. “Cognitive dissonance? Embrace it. Create a sense of meaning and purpose by doing something useful with your life (I teach), being creative – I don’t mean that in a poncey hipster way, I mean make a curry, build some bookshelves, write a poem.”

“And most importantly, find people you like and love and spend lots of time with them. I regularly have people over for dinner, throw parties for no other reason than I just want to spend time surrounded by the people I love. And if you’re really stuck, eat rice and dal. Physically filling yourself with the food you love really does fill the emptiness you may feel inside.”

Sam Newlands, professor of philosophy at the University of Notre Dame, sees hope as an important instrument that can instill in him “a sense of agency and urgency over the object of my desires” and bring about realization of goals, as he said in an interview with Big Think. And what’s more, hope can be a way to have the benefits of faith without necessarily believing in God.

Newlands makes the distinction that faith works in having a commitment “that something is going to be certain” even without evidence for it. Hope, on the other hand, does not even need to concern itself with evidence. You can very much hope for very improbable things to come true. We hope almost irrationally.

Still, hope and faith inhabit some of the same territory. What’s interesting about hope is that it operates “between absolute impossibility and certainty,” says Newlands. Most people, save for adamant atheists, do not believe that the existence of God is somehow logically impossible, and in that space may live hope. 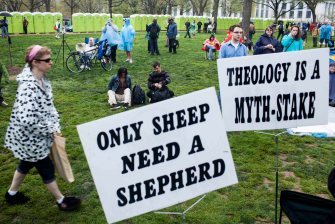 People gather for the Reason Rally on the National Mall March 24, 2012 in Washington, DC. Atheists and those who oppose religion in government gathered for a rally where they celebrated not having religious affiliations. (BRENDAN SMIALOWSKI/AFP/GettyImages)

The Nobel Doesn’t Mean Gravitational Wave Astronomy Is Over; It’s Just Getting Good