David Goggins is the only member of the U.S. Armed Forces to complete SEAL training, Air Force tactical air controller training, and the U.S. Army Ranger School, where he graduated[…]
Go to Profile 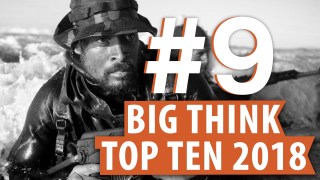 From 300lbs to a Navy SEAL: How to gain control of your mind and life

The countdown continues! This is the 9th most popular video of 2018 — and great fuel for starting a new year.
▸
11 min
—
with
David Goggins

DAVID GOGGINS: So I'm all about acknowledging your shortcomings in life. A lot of people talk about "triple down on your strengths. Triple down on your strengths and don't worry about your shortcomings." That's a whole new thing I'm hearing right now. Maybe it's not new, but it's new to me because I'm not out there really listening to all this stuff. That's the quickest way to never grow. To never grow. If you sit there and have that mentality of "triple down on what you're good at" you're never going to grow. You're always going to stay the same.

It started off, honestly, with recognizing that my bedroom was dirty. My bed wasn't made. I lived a sloppy life. So I took very small increments in my life. I started making my bed. I started cleaning my room. There were dishes in the sink. It started off with doing small house chores. I saw that the yard needed to be mowed. So instead of being told it needed to be mowed, I would mow it.

And let's say you don't like to get up early in the morning to go run. I hated it. I still hate it. You do that. You live uncomfortably to gain growth.

You have to have friction in your life to gain growth. And the only way to do that is to make yourself uncomfortable. And get to the point where instead of running from the things you don't want to do, you actually face them and start to gain more and more growth in your life. So that's how I approach all those things.

Self-talk, for me, has been the biggest thing in my life. A lot of us have a dialogue that is crap. It's a crappy dialogue. We live in a world right now that is very external. Everything is very on the surface. Superficial. Everything. And what we're telling ourselves is what we see on TV. It's what we see on Instagram. It's what we see on Facebook. And we're telling ourselves stuff that doesn't really penetrate to our core, to the inside of our soul. So our self-talk is like: "What am I going to wear today? How am I going to look today? I need to act this way today because this way is cool."

My self-talk became something that actually made me better. And I had a whole bunch of negative things in my life. And to get to the self-talk portion of it first, you have to quiet all of the phones and social media and all the negativity of the world to get to even hear your own self have a self-talk.

You can't have self-talk if you're hearing someone else's dialogue and what they're putting out on social media. How they want you to act. How they want you to dress. How they want you to talk. Everything out there is you trying to keep up with somebody. You're not trying to find your own self. So you have to clear away all the crap. And how you clear away the crap to even get to your self-talk is you have to get all of the noise of all the crap of the world out of your head. So I call it going to a dark place. You have to get the noise out. Quiet your mind down. Get all the static out before you can even have a real conversation with yourself.

There's something I do that—I have a demonstration. I make somebody very strong and I can make them very weak within three seconds. I put self-talk, my own voice, in their subconscious. And I do something to them that makes them very weak. And they wonder how in the world do you do this. I do it because I'm putting my own dialogue in your head. I'm telling a person that "you're insecure". I'm telling a person that "you're weak" and I'm able to make this person almost—they have no strength. And the I give it right back to them. And all day long we are feeding ourselves the wrong self-talk. It's negative self-talk.

So all day long I'm putting the positive self-talk in my subconscious. I'm making sure that I'm walking around all day long giving myself the proper fuel to attack the world. That's why I work out hard every day. I work out hard every day because I know the first thing in the morning, what I do is I clean my room, I clean my house, I go for a run, I work out. I want to win the war in the morning. Because the second I leave my house, the second you look at your phone, the second you turn the TV on you're in a battle. All this negativity is coming at you.
But if you're able to fuel yourself in the morning, win the war in the morning so you have the strength to face what you're going to face in the world. The world is going to come at you with lefts and rights. You have to have the right kind of mentality, and that starts by not hitting the snooze button. It starts by waking up. No, you don't want to do it, but that gives you the strength—because you did it.

If you do something you don't want to do every morning you're already giving yourself the proper self-talk. You're already giving yourself the proper dialogue to attack the people that don't like you. To attack your insecurities. To attack what the world is going to give you. So self-talk comes from belief in yourself. If you give yourself self-talk, positive self-talk, but you don't believe it, it's not going to come true.

So one thing I developed in my life going through hard times is the cookie jar. The cookie jar is—all of us have a story; we've all overcome so many things in our lives. But we forget them.
And a lot of times we don't spend enough time reflecting back on our lives realizing how great we truly are. We go through something, we put it back and we go on. And life is going to always challenge us, always challenge us. And during that challenging moment we panic. We forget who we truly are. That cookie jar that I designed for my brain is something that in that one second of panic, we lose our mind and we also lose how far we've come in life. You take that one second, go through your cookie jar, grab something in your mind. Look at it, read it, open it up. "Oh, I was in three Hell Weeks. I graduated two of them." That's a cookie.

It reminds yourself just how hard you are and it puts you right back into the right frame of mind to overcome whatever is in front of you. And usually whatever is in front of you isn't as big as you make it out to be. We start to make these very small things enormous because we allow our minds to take control and go away from us. We have to regain control of our mind, and that's what the cookie jar is: is gaining control of a situation that isn't that big. Most situations in life aren't that big. And if they are that big usually we can find the strength to handle them just through having the right mental process.

The 40 percent rule is something I designed also when I was growing up. I realized, when I was almost 300 pounds and I lost all the weight to become a Navy SEAL, I realized that I could have lived the rest of my life being a 300-pound person, never knowing what was truly inside of me. I could have been happy with that person. I was living at about 40 percent. Maybe not even 40 percent.

So in life—it's like a car. A lot of cars have governors on them. A governor is something where, let's say the speedometer says 130 miles an hour. You put a governor on a car, it may only go 91 miles an hour because that governor stops that car from going 130. We do the same thing to our brain. When our brain starts to go through suffering, when our brain starts to go through pain or starts to go through insecurities, when we start to feel uncomfortable with ourselves, our brain gives us a way out. And that way out is usually quitting or taking the easier route.
If we're able to look at ourselves and face whatever we're running from, you start to gain more percent on top of that 40. You start to realize okay, you start to slowly take that governor off your brain. We can do a lot more than we think.

At work, a lot of us have a horrible mentality at work. We go to work. We put all these negative things in our brains and it starts to cap our potential. We cap our potential by saying we're giving 100 percent. No one is really giving 100 percent. Usually you're giving 40 percent because that governor is stopping you. You feel pain, you feel suffering, you feel discomfort, you stop right there. Everybody has a wall in their mind. It's a wall, and it stops us from going further. Most walls have a door or a window. You have to find that. You have to have the courage to find that. And once you open that door or that window you'll realize how much further you can go. And you're going to continue hitting doors and windows along this journey but you have to have the courage to open them up to get to that 100 percent. So it's all about having the courage and realizing that we have a governor. We have to push past that governor and past your own mind games.

Can your heart grow three sizes?