Sometimes, wearing eyeglasses can be a pain. You need to change them with every new prescription and in addition they don’t always serve you well enough. Reading glasses, for example, help you focus up close but become useless if you need to go back to doing other activities. According to the American Academy of Ophthalmology more than 150 million Americans use some type of corrective eyewear, spending $15 billion each year. We may all need glasses at some point, because as a natural side-effect of aging, the lens inside our eyes that adjusts the focal depth depending on what we look at, loses its ability to change focus.

A team of engineers and electricians from University of Utah wants to solve part of this problem by reducing the need of wearers to have several types of glasses or to take glasses on and off depending on the situation. Engineering professor Carlos Mastrangelo and doctoral student Nazmul Hasan have created “smart glasses” that can automatically adjust the focus of what a person is seeing making the scene always clear, no matter if it is near or far. 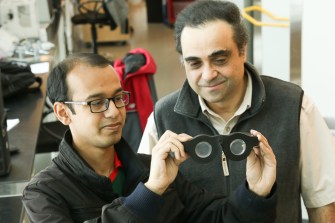 The smart glasses lenses are made of glycerin – a colorless liquid, which is enclosed by flexible membranes in the front and back. A mechanism in the rear membrane of the lenses allows them to change their curvature, which in turn changes the optical power of the lens. How do the glasses know how to adjust? An infrared light meter in the bridge of the glasses measures the distance between them and the objects the wearer looks at. The frames (which will need a design intervention at some point) house additional electronics and a battery that can last more than 24 hours per charge.

But what is a new invention without an app to go with it? The glasses do come with an app, in which the wearer inputs his or her prescription, so that the glasses know how to adjust initially. This is all it takes – no need for custom lenses, and even if the prescription changes in the future, the glasses don’t have to.

The team has already created a startup company with the goal to commercialize their invention, hoping to hit the market in about three years.

It started with a 22-year-old woman, named in papers only as Mrs McK.
Hard Science

Hybrid working, robot fast food workers, and the rapid acceleration of NFTs are just the beginning.
Up Next
Surprising Science

Apeirophobia is Apparently the Fear of Living Forever

Some people are just as afraid of eternal life as non-existence.