In October 2017, five of the richest men in the world sat next to each other in Saudi Arabia’s capital Riyadh and with childlike excitement talked about their new shared dream: building Neom.

They were on stage at the first edition of the Future Investment Initiative, an event that gathered international business leaders to explore new economic opportunities for a country that hopes to be no longer dependent on oil revenues as it fulfills its “Vision 2030” program. 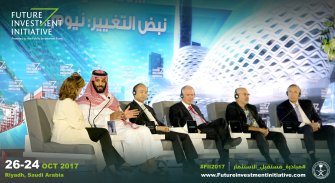 Neom is to be the grandest manifestation of that vision. A city of the future, the likes of which the world has never seen—except maybe in science fiction books and movies. It is to be built from scratch on 10,231 square miles of untouched land in the northwestern region of Saudi Arabia, including territory from within the Egyptian and Jordanian borders.

It will be an independent zone, with its own regulations and social norms, created specifically to be in service of economic progress and the well-being of its citizens, in the hopes of attracting the world’s top talent and making Neom a hub of trade, innovation and creativity. 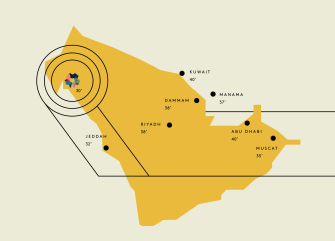 Neom’s location offers a terrain with mountains, deserts, 285 miles of coastline and coral reefs, as well as a moderate climate, with temperatures on average 10 degrees Celsius lower than the rest of Saudi Arabia / Credit: discoverneom.com

While the scope of ambition for this urban project may be unprecedented for this century, its necessity is evident. With falling oil prices and declining demand, as well as insufficient investment opportunities at home, Saudi Arabia is searching for its place in the future.

It hopes to utilize another abundant natural resource: the sun. As Masayoshi Son, chairman and CEO of the SoftBank Group Corp. of Japan, said during the panel:

“Only 3% of the land of Saudi Arabia can provide over 50% of the electricity of the world, with today’s solar technology.”

Neom will not only become a test case for a zero-energy mega-city (with a size 33 times that of New York), but it will provide abundant opportunities for employment and investments within Saudi Arabia, attracting local and foreign money back to the country. The city’s vision is to be at the forefront of nine key economic sectors, including energy and water, biotech, advanced manufacturing, and food. The goal for Neom is to not only be able to provide for all of its energy needs via solar and wind power, but to also be an exporter / discoverneom.com

Addressing a question about the political and social stability of the region, Prince Mohammed bin Salman said:

“We were not like this in the past. We only want to go back to what we were — the moderate Islam that is open to the world, open to all the religions. […] 70% of the Saudi people are less than 30 years old, and quite frankly we will not waste 30 years of our lives in dealing with extremist ideas.”

$500 billion has already been committed to the construction of Neom, with its first phase expected to be completed in 2025. The city will be owned by the Saudi Arabian Public Investment Fund, overseen by a special authority, chaired by Prince Mohammed bin Salman. Excluding sovereign laws (pertaining to the military sector, foreign policy and sovereign decision), Neom will have its own governmental framework, including different taxation, customs and labor laws.

Neom has a strategic coastal Red Sea location close to international markets and trade routes. Approximately 10% of the world’s trade flows through the Red Sea and 70% of the world’s population can reach it in under eight hours flight. / discoverneom.com

Marc Reibert of Boston Dynamics emphasized that the success of the project will depend on attracting the right talent (“dreamers” are welcome) and creating the right culture of innovation that will allow for building this technological city of the future, where all services and processes will be entirely automated, food will be grown in the desert, drones will fly in the skies, and there will be a full-scale e-government.

At this initial stage it is unclear what Neom will look like, but we may get a taster thanks to another “future city” project to be built in Canada albeit on a much smaller scale.

Sidewalk Labs, owned by Alphabet has committed $50 million to develop 12 acres in the Quayside area of Toronto in a public-private partnership with the city. The plan is to build a mini digital city, using a range of smart technologies, sustainable energy and autonomous cars, that will eventually become the home of Google’s Canadian headquarters.

Of course, redeveloping an area within a city and building a city from scratch are two entirely different endeavors, especially when the ambition for the latter is to “be the most exciting, fulfilling place to live and work on the planet. A tribute to humanity’s timeless ambition, the herald of a new era and a new standard for centuries to come.”

History can provide us with its fair share of examples where humanity’s vision of would-be utopian cities did not manifest itself the way it was intended. Hopefully, given the fact that both Neom and Sidewalk Toronto are intended to be commercial projects, things will pan out differently.

Tags
free zoneFuture Investment Initiativefuturistic cityinnovationNEOMnew cityPrince Mohammed bin Salmansaudi arabiatech hub
In this article
free zoneFuture Investment Initiativefuturistic cityinnovationNEOMnew cityPrince Mohammed bin Salmansaudi arabiatech hub
Related
The Present
How California could save its rain instead of letting it drain into the ocean
Why can’t more rainwater be collected for the long, dry spring and summer when it’s needed?
Hard Science
Scientists use laser beam to divert lightning strikes
Laser-guided lightning systems could someday offer much greater protection than lightning rods.
The Future
Paper-thin solar cell can turn any surface into a power source
Some solar cells are so lightweight they can sit on a soap bubble.
The Past
How electricity stormed past steam and became the power of the future
The shift from steam to electricity was inevitable — but some foresaw it earlier than others.
The Past
What made Ada Lovelace so brilliant
Ada Lovelace’s skills with language, music, and needlepoint all contributed to her pioneering work in computing.
Up Next
The Present
To End Foreign Civil Wars, Should the US Intervene?
Civil wars are a particularly brutal type of conflict. Warring sides are trapped inside a single border, the fighting can last decades, and peace may not last once the fighting stops.