Why sex behind the Iron Curtain was better for women

A new book about life under communism reveals an unexpected benefit.

Think of every image of communist Eastern Europe you've ever seen and every establishing shot of it ever put to film. You're probably thinking of long lines of people waiting to get bread, drab grey tenements, and prematurely aged couples reading Pravda while their neighbors are arrested for crimes against the people they probably didn't commit.

This image is popular and not without some truth to it, but if a new book by Kristen Ghodsee is correct you'll need to add another idea to your stereotypes: Excellent sex. 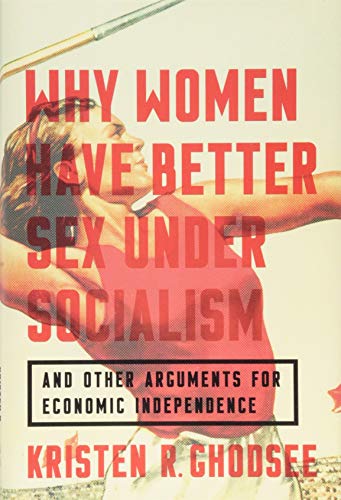 Why Women Have Better Sex Under Socialism: And Other Arguments for Economic Independence
List Price: $22.00
New From: $10.71 in Stock
Used From: $8.27 in Stock

Women had better sex under socialism

After the reunification of Germany, a few interesting studies were undertaken about the sex lives of German women from both sides of the Iron Curtain.

To the surprise of many in the West, two-thirds of the East German woman reported that they "almost always" had an orgasm during sex, with another 18 percent revealing they did so "often". What's more, 82% of them reported being "happy" after sex. On the other hand, the West German women experienced orgasms half as much as their communist counterparts and only 52% of them reported being "happy" after sex.

In Russia, studies on various kinds of relationships show a proliferation of people viewing relationships as a mere "calculation" after the fall of communism and a slew of friendship- and romance-driven ones during the days of the USSR. When combined with interviews given by Eastern Bloc women on how life was before and after the fall of communism, there is a clear dividing line between sex before and after capitalism won.

But, why was this the case?

Ironically, a capitalistic idea called sexual economics theory can shed some light on the subject.

The idea rests on a few questionable assumptions; it assumes that men have much higher sex drives than women and that women are more than willing to use sex as an exchangeable service to acquire goods and services from men on a regular basis. While these are far from generally accepted ideas, the theory is a useful tool for discussion.

In the theory, the "price of sex" can vary based on supply and demand, much like any other commodity. When there are more women then men the price falls, when there are more men than women the price goes up. Casual sex causes the price to drop. In a society where women cannot make money outside the home, marriage can be the "price" of assuring a lifetime deal where women are guaranteed economic support and men are assured intimacy.

However, if women are economically independent – in the USSR women were encouraged to go into STEM fields and made up 50% of all "engineering and technical specialists", and many Eastern Bloc countries made attempts at public childcare services for working families – then the need for this vanishes.

The idea then is that when women have economic independence, accessible childcare options that make parenting while working easier, and the right to leave relationships they no longer care for, the commodification of sex ends and the markets described above break down. Since Eastern Bloc men could no longer "buy" sex by just being providers, they had to be competent at it instead if they wanted to keep their relationships working.

The author also explains that in some of the Eastern Bloc countries, Czechoslovakia in particular, men were encouraged to better share housework with women. Since we know now that couples who split domestic work more evenly have more sex, it is presumed that this effect also existed behind the Iron Curtain. The Polish were a tad more conservative than their neighbors, but still developed a holistic approach to sexology that might explain why they are still more satisfied than Americans to this day.

So, should we all start wearing Mao Jackets and singing the Internationale? Not quite, as good sex doesn't fully justify the other things Soviet-style communism did, and the Romanian communists didn't manage to achieve any of the benefits mentioned above. Dr. Ghodsee doesn't endorse a return to state socialism at all. Instead, she suggests that we learn from both the communist states of old and the social democratic countries of today and how they made life for women better.

The use of quotas in Scandinavian countries to increase the number of women on the executive committees of large corporations has been rather successful, though the limited success of the program in creating change outside the boardroom leaves some room for improvement. Other programs that Dr. Ghodsee suggests America steal from other countries include mandatory maternity leave and bolder action on ending the wage gap.

She also mentions that because women have lower wages and own less wealth than men, government programs that provide services for everybody are more likely to benefit women. It is entirely possible to implement programs like universal health and childcare or job guarantees without falling to authoritarianism. She also mentions how people who work in the public sector tend to be female and suggests expanding it to improve economic opportunity. More than a few objections have been raised about the hypothesis that sex was better under communism since the idea was first put forward. A few of these are worth mentioning.

First of all, all of the data is self-reported. While the statistics are probably fine in this case, women in East Germany had no reason to lie any more than women in West Germany, and though there isn't a better way to learn all of this, the data should be taken with a grain of salt.

Secondly, while the common interpretation of these studies is that the socioeconomic status of women was the driver behind the improved sex, other explanations have been put forward. One of the more amusing ones is that in a society plagued by rationing there might not be much else to do in the way of entertainment on a Friday night.

Despite these issues, the primary finding still stands; women in the Eastern Bloc claimed to have better sex lives than their Western counterparts, and there are explanations as to why this might be the case that aren't too far-fetched.

Should we all storm the barricades in the name of Marx and better sex lives? Probably not, but the lessons from behind the Iron Curtain on sex, relationships, and giving new families the support they need are still of use. As Ghodsee says about state socialist systems, "There was a baby in that bathwater. It's time we got around to saving it."