Today’s guest Ari Shaffir is a stand-up comic and the host of Skeptic Tank – a super popular weekly podcast that’s on its 299th episode (at this writing). Ari grew up orthodox Jewish, spent two years in a yeshiva in Israel, and then turned into an atheist comedian who did an outrageous web video series called “The Amazing Racist” and runs a yearly “Shroomfest” where he’s like a benevolent Dionysus, presiding over a worldwide three-day celebration of psilocybin mushrooms. He co-created and hosts Comedy Central’s storytelling series “this is not happening”. And he’s got a very funny, two part comedy special on Netflix called “Double Negative”.

Ari and Jason talk about outrageousness in comedy, bipartisan e-rage on social media, growing up and growing out of bad habits, the transgender bathroom debate, and much, much, much more. 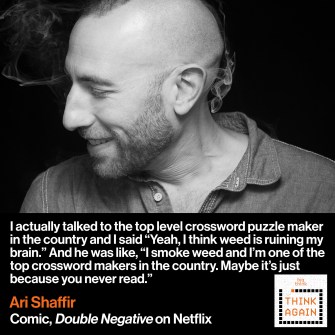 Subscribe for counterintuitive, surprising, and impactful stories delivered to your inbox every Thursday
Related
Hard Science
Some earthquakes last for seconds, others for minutes — and a few for decades
What do you call it when the Earth shakes for three decades?
Sponsored
What childhood “money story” is shaping your financial behaviors?
Here are the signs that you inherited “money anxiety” from your parents.
The Present
The “maritime Indiana Jones” who salvages shipwrecks now wants to tow icebergs
Simple physics makes hauling vast ice chunks thousands of miles fiendishly difficult — but not impossible.
Neuropsych
Inside the brains of aging dogs
In a citizen science project, thousands of pet dogs are helping scientists to understand what happens to memory and cognition in old age.
Neuropsych
The most common source of awe might surprise you
It’s us.
Up Next
5 Tips for Developing an Effective Learning Culture at Work
You know what many of the best employees have in common, regardless of the industry they work in? They’re constantly learning new things and applying those lessons to their work.