"Kids Born Today Will Never Get to Drive a Car," Says a Top Engineer

Robots and AI are going to become an everyday part of life, but will that take away other everyday parts of life? 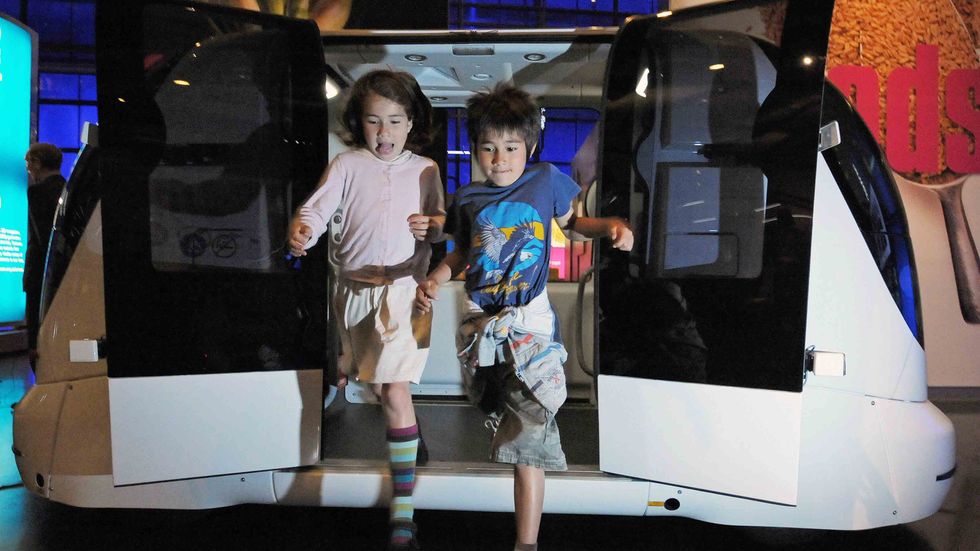 Children jump from a driverless car during a photocall at the Science Museum, in London. (CARL DE SOUZA/AFP/Getty Images)

As you have read here before, robots and intelligent machines are entering our lives in ways that were science fiction even a decade ago. Self driving cars are on the road, and Ford plans to have a mass produced version coming off the line in five years.  Robotics has always been a dream for Americans, from robots that would clean our homes to intelligent computers making our lives simpler. The dawning of this new technology is a dream come true for many.

But, what is the scope of this? How will everyday life change in the United States?Georgia Tech engineer Henrik Christensen predicts the changes will be vast, including the end of that most American of hobbies and rites of passage:

“My own prediction is that kids born today will never get to drive a car.”

His rationale is simple, driverless cars are going to be better at what they do then any human could be. With programming able to improve safety and efficiency to incredible levels. He predicts that: “With autonomous, driverless cars, we can put twice as many vehicles on the road as we have today, and do it without improving the infrastructure.”

Think about that statement for a moment. Kids born today will never get to drive a car. Given the history of car culture in America, the number of great american books based around road trips, and the pure cultural weight given to the act of driving and the owning of a car. This statement is huge. Truly, intelligent machines will change all of our lives. He goes so far as to suggest that in a few decades “you're not even going to own a car. A car becomes a service”. Removing a prominent status symbol from the garage of many Americans.

And he goes on to tell us about our very livelihoods changing.

When asked about the effect the use of robotics will have on our economy. He gives us this mildly disconcerting answer. “We see two trends. We will use robots and automation to bring manufacturing jobs back from overseas, primarily from Southeast Asia. At the same time, we will see some jobs get displaced by automation. There will be fully automated, driverless transportation in this country by 2020, and that will eliminate some jobs now held by workers like truck drivers and taxi drivers.”

He is unable to guess if that will lead to a net increase or decrease in jobs, however. Saying the data doesn’t currently exist to make that determination. How this will affect the economy at large he does not say, he notes the debate around the basic income exists, but sees the current political system in America as unable to accomplish that goal.

So, the future is now. Our economy, our lives, and our culture will soon change in the face of robotics, AI, and automation. What will be on the horizon in ten years? Will it have promises as far reaching as these before us now? One thing is for certain, we will finally be living in the world dreamed of by Ray Bradbury, and the sci-fi fans of days gone by.

Watch here as Tesla's autopilot predicts a crash and avoids a collision.