Why are we so critical of ourselves after meeting someone new? Self-protection.

A new study discovers the “liking gap” — the difference between how we view others we’re meeting for the first time, and the way we think they’re seeing us. 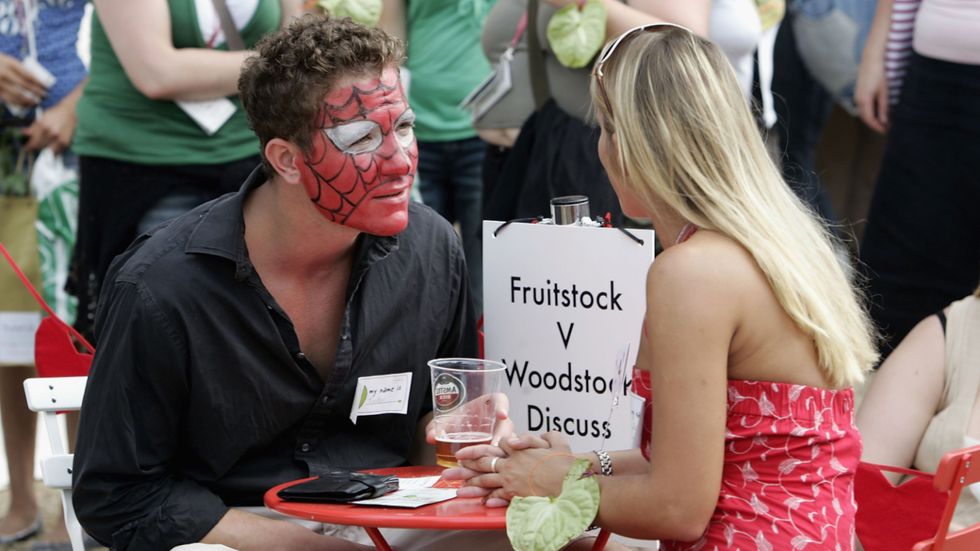 New acquaintances probably like you more than you think. (Photo by Simone Joyner/Getty Images)

We tend to be defensive socially. When we meet new people, we're often concerned with how we're coming off. Our anxiety causes us to be so concerned with the impression we're creating that we fail to notice that the same is true of the other person as well. A new study led by Erica J. Boothby, published on September 5 in Psychological Science, reveals how people tend to like us more in first encounters than we'd ever suspect.

We spend an inordinate — some would say “unhealthy" — amount of time worrying about what others think of us. We don't really know how we come off, in truth, but we regularly construct a metaperception of ourselves that represents how we think we do. And we tend to be unkind to ourselves, according to the new study.

What the study reveals is that there's a major disconnect between the way two people are likely to judge each other on first meeting, but it's not what you might expect. Their experiments show that in a first encounter, each person thinks well of the other person but assumes that they themselves have come off poorly. Since both parties feel this way, an almost comical asymmetry occurs, with a significant gap between how we're viewed and how we think we're viewed.

Co-author Margaret S. Clark tells YaleNews, “We call this a 'liking gap,' and it can hinder our ability to develop new relationships." She adds, “They seem to be too wrapped up in their own worries about what they should say or did say to see signals of others' liking for them, which observers of the conservations see right away."

Since both people like the other person more than they assume they themselves are being liked, “We're self-protectively pessimistic and do not want to assume the other likes us before we find out if that's really true." This makes the process more awkward than it needs to be, risking the loss of an opportunity for enjoyment. Later on, “We critically monitor ourselves and regret not telling the joke more smoothly or worry about whether we sound as if we are bragging."

Boothby and her colleagues performed a series of experiments.

Experiment 1a: Is There a Liking Gap?

In this test, the researchers recruited 36 people from the Yale community, 72.2 percent female, and 27.8 percent male. The average age of participants was 23.25 years, with a standard deviation of 6.12 years.

Each subject was introduced to a same-sex partner, and, having been provided some ice-breaking questions to keep the conversation going, the two were seated side-by-side at a large table and tasked with chatting until a researcher returned in five minutes. The conversation was recorded on a computer nearby that displayed a large analog-style clock to help the new acquaintances pace themselves.

Afterward, the subjects were separated and asked to rate their agreement with eight statements.

Four assessed how much they liked the other person:

Four assessed how much they thought the other person like them:

The researchers concluded, “after a brief conversation with another person, people significantly underestimated how much others liked them." They found their experiment “provided the predicted evidence of the liking gap."

Before moving on, a follow-up test, 1b, assessed whether or not subjects were clearly signifying their approval of each other during the conversation, and the researchers concluded that they clearly had — the signals were just not being picked up.

The results from Study 1a above and Study 2 below (Boothby, et al)

Study 2: Why Does the Liking Gap Exist?

In this experiment with paired same-sex conversants from a pool of 84 students and recent graduates — 59.5 percent female, 40.5 percent male and a median age of 19.25 years — there were no icebreakers provided. Instead, the instructions were simple: “You'll have about five minutes to talk, and you can talk about whatever you like. I'll keep time from the other room and then return when it's time to move on."

Subjects were then asked to describe the significant moments in detail and assign them a rating of 1–7, from "extremely negative" to "extremely positive."

The researchers were able to conclude, “When participants reflected on their conversations, their most salient thoughts about how others viewed them were more negative than their most salient thoughts about how they viewed others, and this difference was related to how much they believed their conversation partners liked them."

Study 3: Does the Liking Gap Persist in Longer Conversations?

In their third experiment, this time with 102 subjects — 52.9 percent female, 47.1 percent male and a median age of 23.62 — were given up to 45 minutes to chat about anything, self-regulating the duration as they saw fit, and then questioned.

The team wanted to ascertain whether the length of a conversation affected the presence of a liking gap. The answer? No: “In sum, across conversations that ranged from 2 min to 45 min, people systematically underestimated the extent to which their conversation partners liked them and enjoyed the conversation."

Study 4: Can the Liking Gap Be Observed in the Real World?

To find this out, 128 people attending “How to Talk to Strangers" workshops were evaluated —52 percent female, 42 percent male and a median age of 29.61.

An analysis of their responses revealed that, yes, the liking effect is not just something that happens in the unnatural environment of the lab. Interestingly, in this case, it existed both before and after the experiment, with researchers finding that, “when anticipating a future conversation, participants underestimated how interesting their conversation partner would find them. This mistaken belief persisted — and indeed was magnified — after participants actually talked to their conversation partner."

Study 5: Does the Liking Gap Persist Over Time?

In this final test about the persistence and long-term effect of the liking gap, 102 first-year college students — 49.5 percent female and 50.5 percent male — participated in a year-long study looking into “how relationships normally develop."

They were questioned at the beginning of the study and then four other times over the course of the year regarding from one to four people in their dorm area. Of the other people, they were asked:

They were also asked how they thought they were perceived:

Concerningly, when the results were analyzed, says the study, “The liking gap persisted over short, medium, and long conversations and even over the course of a year, as suite mates developed new relationships." This means that first impressions really do matter, in the sense that they help us develop habits regarding how we feel about others and how they feel about us.

What are we supposed to do with this information?

When you find yourself wondering how you're seeming to a person you're just meeting, take comfort in the fact that they probably aren't paying that much attention to you — they're too busy wondering what you think of them. The best strategy? You might try just relaxing and having a good time meeting someone new.