This is how much the most profitable U.S. corporations make a second 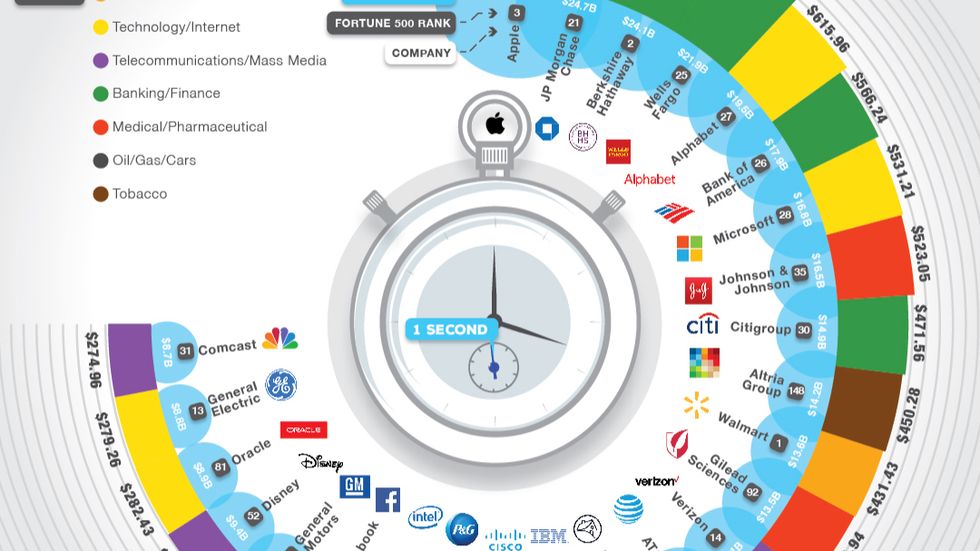 Neil DeGrasse Tyson noted in 2014 that if Bill Gates was walking down the street and saw money on the ground, if it was any less than $45,000 he’d actually be losing money to stop and pick it up. That’s how fast his wealth accumulates. (This was 2014, mind you, so who knows how much that figure would be now.) While not quite in Gates’ bracket, the same idea applies to a number of corporations, whose profits accrue so lickety-split that it’s dazzling. TitleMax has put together an infographic of what the 31 most profitable companies made each second of 2016.

Beyond Apple, the three top finance companies — JP Morgan Chase, Berkshire Hathaway, and Wells Fargo — pull in $2,237.19 every second. (Mortgage company Fannie Mae is at a mere $389.38 per second, but still, yipes.)

Another sector dominating the fast track is tech. Alphabet (Google’s parent company) leads the way, with $615.96 each Mississippi, but Microsoft, IBM, Cisco, Intel, Facebook, Oracle, and General Electric (GE, really?) are all playas. At the bottom of the list in net-neutral 2016 was Comcast, with AT&T and Verizon midway up. If it’s really the end of net neutrality — court cases are just starting at this writing — expect these ISPs to move on up.

DeGrasse Tyson notes that he himself wouldn’t stoop for a penny, but that a quarter would be a different story — that’s the bottom value that would be worth his while. Most of us would probably feel the same. Philanthropist Gates, though? He should just keep walking.