Tabletop Physics May Be About to Find Answers Supercolliders Can’t

A new generation of tabletop physics devices may be the next forefront for breakthrough discoveries. 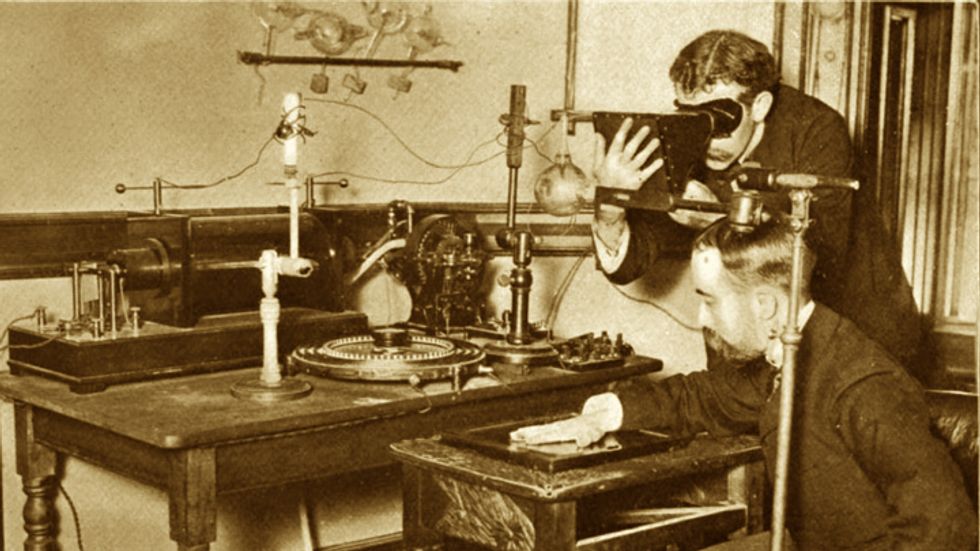 When we think of discoveries at the forefront of physics, we tend to think of massive particle accelerators like the 27-kilometer Large Hadron Collider (LHC). But it wasn’t always this way. Physics arguably began with the introduction of atoms by Leucippus and Democitrus, who logically worked out the existence of atoms around 450 BC. J. J. Thompson discovered electrons in 1897 using comparatively simple electrically charged cathode tubes; Ernest Rutherford discovered the nucleus in 1911 using a similarly modest rig.

Now in the 21st century, tabletop physics is making a comeback.

The value of particle accelerators is obvious, climaxing — for now anyway — with finding the Higgs Boson in 2012. But since then, meaningful findings have become scarce. But big questions remain, and simpler devices may actually be better at of finding certain answers.

One of the great mysteries of physics is why gravity is so much weaker than the three other fundamental interactions — electromagnetism and weak and strong nuclear forces — it’s the “hierarchy problem.” One prominent theory, nicknamed “ADD” after its proponents, is that gravity is losing some of its power because it’s spilling over into other, shrunken dimensions. Newton’s inverse square law of gravity says that the gravitational force between two objects is always inversely proportional to the square of the distance between them. But ADD assumes that this inter-dimensional leakage is baked into Newton’s math, and posits that the interaction between objects smaller than 100 microns apart should be stronger, since at that size, gravity wouldn’t yet have had the chance to leak away and behave as Newton observed. But making measurements at this scale is difficult.

“We are like dinosaurs. We have gotten bigger, and bigger, and bigger,” MIT physicist Janet Conrad tells Quanta Magazine. But the ease with which tabletop experiments can be tweaked and continually reconfigured to smaller and smaller scales may offer an experimental agility that big colliders can’t match. “I really do believe that this is a new field,” she said.

Torsion balances, or torsion pendulums, are nothing new: They were invented some time before Charles-Augustin de Coulomb started using them in 1711 to measure the electrostatic force between two charged objects.

After ADD was proposed in the late 1990s, Eric Adelberger and his team at the University of Washington — who happened to have a torsion balance on hand from an earlier experiment — decided to have a go at seeing if ADD could be proven. They’ve been publishing their results since 2001, derived from an increasingly sensitive series of four torsion balances and other pendulums. They’ve gotten their observations down to around 42 microns in 2013 — so far, there’s been no deviation from Newton’s observations. Adelberger is aiming next at about 20 microns.

Andrew Gerachi and His Beads

Gerachi and his team have built an airless chamber inside of which is a .3-micron silica bead 300 millionths of an inch across, held in a lattice of laser light – the bead scatters light onto a detector. If the bead becomes displaced by the gravitational nudge from a nearby and similarly small object, the pattern changes and the bead’s new position can analyzed to measure the gravitational force it responded to. However, the tiny scale at which the team is working can only produce the smallest of gravitational forces. The team has demonstrated they’re capable of detecting gravitational forces that are a mere few billionths of a trillionth of a newton, the amount of gravity the Earth exerts on a falling apple. But detection isn’t measurement, and that’s harder.

Dark matter doesn’t seem to interact at all with electromagnetism or weak and strong nuclear forces. Some have theorized that it operates by means we’ve yet to detect, and that there are dark-matter force-carrying particles called axions and dark photons that do interact with standard matter, though very weakly. Hendrick Bethlem of the Free University of Amsterdam hopes to see evidence of these faint interaction in ammonia molecules.

He’s using a device called a “molecular fountain.” In it, electricity propels the ammonia molecules to the top of an air-filled chamber from which they slowly sink due to gravity. As they fall, they’re detected by a laser, and then “interrogated” by a spectroscope. The point of this is to determine the energy levels of the molecule’s electrons, and thus their mass. The mass of the molecule’s protons are also measured. These two measurements should be identical unless some other influence — such as that produced by axions or dark photons — is in effect.

Two California physicists, Surjeet Rajendran and Peter Graham, are also on the hunt for dark matter’s axions and and dark photons, and they’ve built their own “dark-matter radio.” It’s a canister 170 cm high and 17 cm across, inside of which is a sensitive magnetometer called a SQUID, as well as a resonant circuit much like the one in a normal radio. Their theory is that axions and dark photons should produce electromagnetic waves in the radio spectrum, somewhere between a kiloHertz and a gigHertz. They plan to listen in with their radio.

They’ve also designed something they call a “CASPEr Wind.” It’s being built for them at Johannes Gutenberg University, in Mainz, Germany. It contains a cubic centimetre of liquid xenon. Should axions fly through, the xenon’s atoms’ nuclei should wobble and create a large enough magnetic field to pick up on their dark-matter radio.

To see physicists return in this way to the field’s roots with the benefit of modern knowledge makes sense. It’s a way of complimenting the ongoing work of the big guys, and what physicists are looking for are the tiniest interactions anyway. Their machinery may be more scaled-back than an LHC, but their ambitions are just as far-reaching.