Scientists Choose a Date For the March on Washington D.C.

Scientists are planning a Scientists’ March on Washington on April 22 to protest the Trump administration’s anti-science policies. 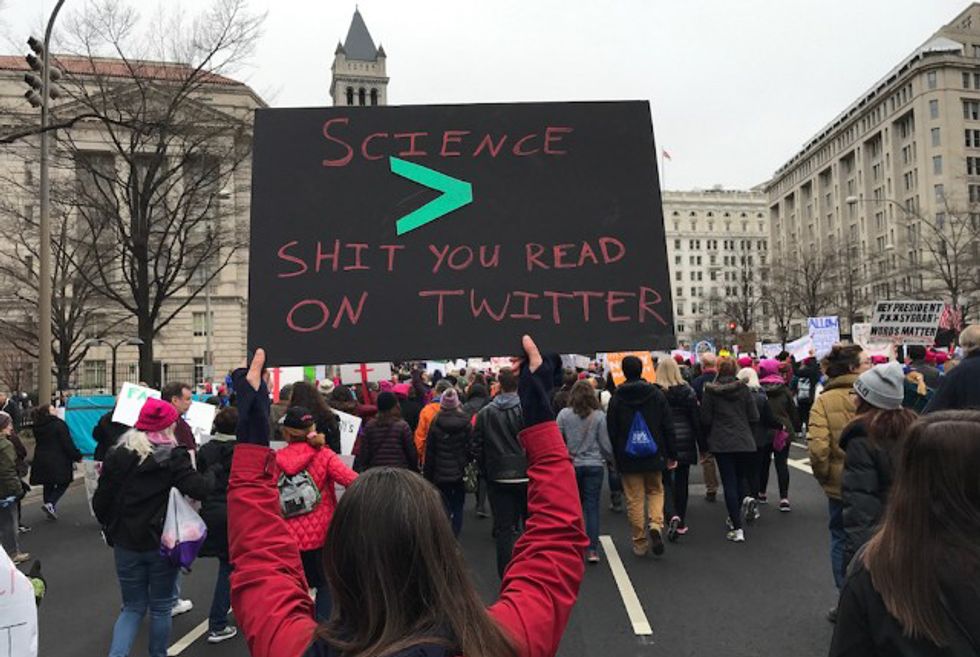 There are certain things that we accept as facts with no alternatives. The Earth is becoming warmer due to human action. The diversity of life arose by evolution. Politicians who devalue expertise risk making decisions that do not reflect reality and must be held accountable. An American government that ignores science to pursue ideological agendas endangers the world.

These are the words written by the organizers of the upcoming Scientists' March on Washington. The date has been set: on Earth Day, April 22, 2017, scientists hope to summon a sea of smart people with a love for science — like you — and the pursuit of knowledge.

The march grew out of a discussion on Reddit, with a private Facebook group and Twitter account launched on Monday, January 23. In just a couple of days, the group had 300,000 members. Their public Twitter account has 288,000 followers and their public Facebook page has 20,832 followers as of this writing. You can also sign up to receive email updates on the march. The organizers are also looking for help.

The scientific community has been under attack for a while now by Christians who take issue with Darwinian evolution, preferring the Bible’s account. And while nobody wants climate change to be real, it is, though some would rather ignore the supporting evidence and overwhelming consensus of the scientific community to reinforce their own denial. There’s a growing cult of ignorance in which people pride themselves on their lack of scientific knowledge, and it threatens to plunge us all into a new dark age.

Nowhere is this being felt more acutely than in the U.S., where the new Trump administration — along with many Congressional Republicans — is firm in its denial of climate change and in their desire to control the national conversation on a range of scientific issues. Through anti-science appointments, the barring of publications from federal science agencies, and the freeze of all research funding, it all amounts to an unprecedented attack on fact-based knowledge. It’s the chilling — and terrifying — first step of a process in which truth can become whatever a group of politicians say it is.

To protect their findings, and the truth, scientists began frantically grabbing and preserving climate change data before the administration came into office. Since the inauguration, employees of muzzled departments have started rogue Twitter accounts as an uncensored outlet for information — unfortunately, many of these have now been handed over to others as employees fear for their jobs.

Caroline Weinberg, one of the march’s organizers, says, “This is not a partisan issue. People from all parts of the political spectrum should be alarmed by these efforts to deny scientific progress. Scientific research moves us forward and we should not allow asinine policies to thwart it.” She adds that science lovers are as welcome as scientists to participate in the march.

It has never been more important for scientists of all stripes to come together and have their voices heard in government.