Scientist announces a laser so powerful it can tear empty space

Shanghai scientist Ruxin Li has already built the world’s most powerful lasers, and he plans a new one that can rip matter from empty space. 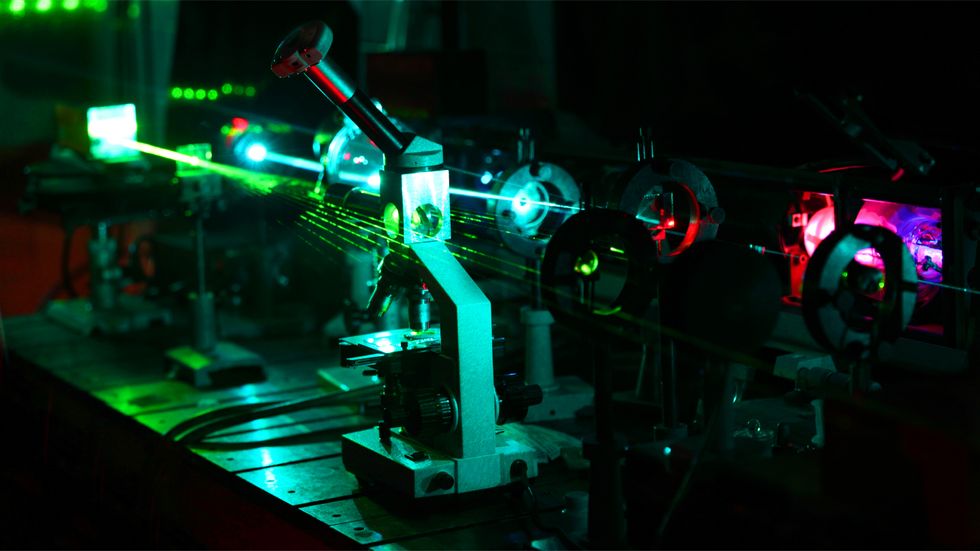 It's not going to be operational until 2023, but scientist Ruxin Li and his team are planning to start building their Station of Extreme Light (SEL) soon. It'll be capable of generating brief pulses of power at 100 petawatts (PW), or 100 million billion watts, in a room 20 meters underground. Li expects it to be capable of “breaking the vacuum," which means it will be able to rip electrons, along with positrons, their antimatter cohorts, out of thin air. While atomic energy demonstrates the possibility of converting matter into intense heat and light, no one has yet flipped around Einstein's E-mc2 equation to convert energy to matter. And that's just what Li has in mind. "That would be very exciting," he tells Science. "It would mean you could generate something from nothing."

Li expects about $100 million in funding from the Chinese government sometime early in 2018, and it would seem likely he'll get it, having already set a word record for the most powerful laser with the Shanghai Superintense Ultrafast Laser Facility (SULF) that's already produced 5.3 PW, and is being upgraded to generate 10 PW by the end of the year — that's more than all of the world's electrical grids produce, a thousand times over.

Lasers everywhere operate similarly at a basic level: There's a lasing material, or “amplifier," a tube in which there are electrons that can be stimulated — SULF's existing laser is a single cylinder of sapphire doped with titanium, about the width of a Frisbee. A “pump," a lamp of some sort, sends photons into the tube, exciting its electrons. When the electrons return to normal from their state of excitation, they emit a photon that then stimulates more electrons, and so on, as a cascading effect, amplifying the original light source. A mirror on one side of the amplifier keeps the photons from escaping so they keep bouncing back and forth in the tube, gaining in intensity. Another mirror at the other end leaves just enough space for photons at a specific wavelength to escape, producing a concentrated beam of light. Or in the case of SULF, a microburst of light less than a trillionth of a second long.

Power equals energy divided by time, and SULF uses an approach for working that axiom developed by Gerard Mourou in 1983. Prior to his breakthrough, lasers generated longer-duration laser beams, but the production of power using such lasers is problematic. Beyond a certain intensity threshold, the medium that boosts the laser's energy level becomes damaged, necessitating the use of bigger and bigger amplifiers. And at that, the most powerful such laser, the National Ignition Facility (NIF) belonging to the Lawrence Livermore National Laboratory (LLNL), achieves just one petawatt in a facility that covers the length of three football fields, is 10 stories high, and cost $3.5 billion. SULF's price tag is a comparatively cheap $10 million, and the current version can sit on a tabletop.

What Mourou found is that a short laser burst could be handled in a less intense, destructive form by stretching it out via a diffraction grating that broke it into its component frequencies. Each of these could be safely amplified before being recompressed back together via a second grating, thus producing more powerful light without damaging the medium. His method is called “chirped-pulse amplification," and it's the operating principle behind the Shanghai laser, as well as LLNL's Nova laser. SULF optimizes the output of its laser by making its bursts as brief as possible, just a few femtoseconds (or a quadrillionth of a second) in duration. Hit the amplifier with a few hundred joules of energy and you get the results Li is getting.

The manner in which Li plans to get his subterranean SEL to 100 PW will require an incredible degree of precision and control. His team intends to use optical grating to split four individual pulses into their components, hit each with a second pump, recompress its parts into a single higher-energy pulse, and then stack the four on top of each other. Timing the four pulses to finish up together in the same few femtoseconds sounds insanely difficult, but that's what Li plans to do, ultimately focusing the resulting pulse on an area 3 micrometers across. The amount of power at that location would be stunningly intense: 25 orders of magnitude, or 10 trillion trillion times, more intense than the light from the sun hitting the earth.

Li hopes the generated electrical field will be sufficient to break the attraction between electron and positron pairs that continually blink in and out of existence in “empty" quantum space, producing gamma rays that would produce their own radioactive pairs of electrons and positrons that could then be detectable. "This will be completely new physics," says Alexander Sergeev, of the Russian Academy of Sciences Institute of Applied Physics, “nuclear photonics."

With such unprecedented power at hand, one can't help but think how Enrico Fermi and his colleagues must have felt when they initiated the world's first man-made, self-sustaining nuclear chain reaction in the Chicago Pile. Over time, scientists came to appreciate the need to control the rate of a nuclear reaction to keep it under control, but at that fateful moment in December 1942, the scientists made an educated guess that they weren't about to tear the universe apart in a cascading atomic chain reaction. Kind of like Li will be doing in his chamber beneath Shanghai. Exciting. And a little bit scary.