New study suggests CRISPR-Cas9 may not work in many people

Our bodies may fight Cas9 proteins. 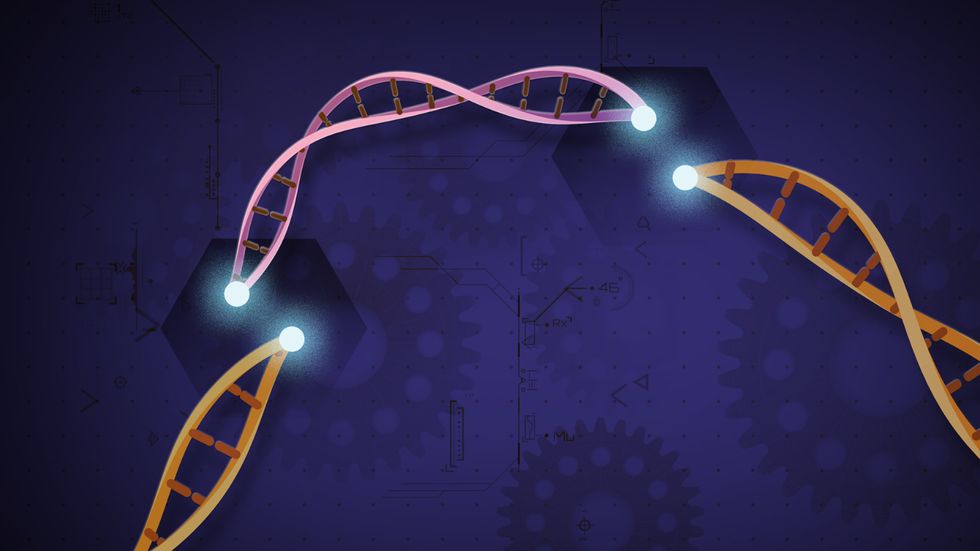 The story began in 1987 when Yoshimumi Ishino of Osaka University discovered that clusters of short sequences in certain bacterial DNA could target DNA within viruses. These palindromic clusters clusters were held together by spacer materials, and eventually came to be known as “Clustered Regularly Interspaced Short Palindromic Repeats,” abbreviated as “CRISPR.” Researchers found that protein families — “CRISPR-associated,” or “cas” genes — occurred alongside these clusters, and that the most workable and promising pairing was with the Cas9 protein. When researchers Jennifer Doudna and Emmanuelle Charpentier discovered a way to target, snip out and replace DNA using CRISPR-Cas9, "It was kind of a like a lightning bolt," according to Doudna. "It was definitely an 'aha' moment." When they published their work in 2012, the excitement was palpable as a new era of simple, efficient gene editing began. Human trials are expected to get underway in Western countries this year, and China has been experimenting with CRISPR-Cas9 for a while. Now, however, a new study by Stanford University researchers has found that a high percentage of people may contain immune responses that could prevent CRISPR-Cas9’s from working, or even be dangerous.

The study analyzed blood for antibodies to two bacteria from which Cas9 is derived: Streptococcus pyogenes and Staphylococcus aureus. The researchers’ concern stemmed from the fact that these bacteria frequently cause infections in humans, and so antibodies to them may be in our blood: “The presence of pre-existing adaptive immune responses in humans to either Cas9 homolog may hinder the safe and efficacious use of the Cas9/gRNA system to treat disease, and may even result in significant toxicity to patients.”

Stanford’s initial finding was produced by testing for IgG antibodies in the serum of spinal cord blood from 22 donors and peripheral blood draws from an additional 12 healthy adults. They found that 65% of the donors had antibodies for Streptococcus pyogenes, the most common source of the protein used in CRISPR-Cas9, or “SpCas9.” 79% had antibodies for Staphylococcus aureus, the source of SaCas9. Fortunately, CRISPR-Cas9 is currently envisioned for ex vivo use, with cells in laboratory media, or in vivo via viral vectors or nanoparticles. In neither case would Cas9 bump up against the IgG antibodies.

Of more serious concern is that the researchers also found T-cells that could attack cells producing Cas9 proteins in six out of 13 donors, because “The existence of the pre-existing cellular immunity would likely both limit the effectiveness of and create safety concerns for Cas9-based genome editing.” No T-cells were found that attack SpCas9, though the researchers caution that this might reflect a limitation to their methodology rather than solid proof of their absence.

What makes the presence of T-cells so serious is that in vivo treatments involve “Cas9 delivery systems that express the Cas9 protein for prolonged periods of time” and so “memory T-cells might rapidly expand in response to Cas9 being presented.” The study concludes, “Furthermore, it is possible to envision that constitutive expression of Cas9 in a large proportion of cells of an organ, for example, the liver, could elicit a cytotoxic T-cell response against Cas9 expressing cells that could result in significant toxicity.”

Stanford’s finding definitely puts a bit of a cloud over the future of CRISPR-Cas9, though just how problematic these existing immune responses will turn out to be is unclear. Certainly, they’re less worrying in regard to ex vivo gene editing, where problems can be caught before modified cells are returned to patients’ blood streams. In any event, as the study concludes, “We believe our findings will stimulate crucial discussions in the genome editing community about how to most safely and effectively apply the Cas9/gRNA genome editing system for gene therapy in humans.”