Researchers are studying the use of sperm cells as micromotors for delivering chemotherapy to cervical cancer patients. 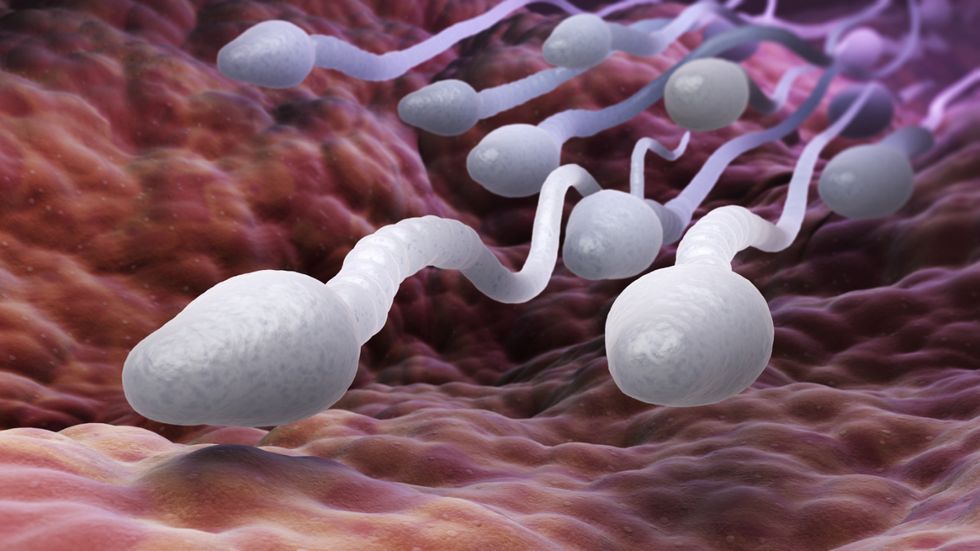 Sperm on the hunt (TATIANA SHEPELEVA via SHUTTERSTOCK)

One of the obvious problems with conventional chemotherapy is that it’s essentially poison formulated to kill cancer cells without killing the patient. While chemo is often the only available treatment option, it’s extremely rough on patients, causing debilitating exhaustion, weakness, and nausea. As a result, it can only be administered in limited doses. In addition, chemo can be diluted by body fluids and be broken down and weakened by enzymes. Now a team of scientists at Leibnitz Institute for Solid State and Materials Research are exploring a new way to aim cancer medications with greater precision directly at tumors while reducing side effects, thus making it safe to administer higher, more effective doses. That new way? Sperm cells.

The team, led by Haifeng Xu, is interested in the use of sperm as a delivery mechanism in the female reproductive system, starting with cancer, and in time perhaps addressing other conditions such as ectopic pregnancies and endometriosis. Their research has just been published in ACSNANO. It explains why they’re interested in sperm cells as a potential delivery mechanism: “…sperms are excellent candidates to operate in physiological environments, as they do neither express pathogenic proteins nor proliferate to form undesirable colonies, unlike other cells or microorganisms. Overall, this sperm-hybrid micromotor is a biocompatible platform that can be used in gynecological healthcare, treating or detecting cancer or other diseases in the female reproductive system in the future.” It also notes, that, of course, “sperms are naturally optimized to efficiently swim in the female reproductive system.” The team’s first experiment targeted mini-cervical cancer tumors in a dish. Sperm cells were infused with doxorubicin hydrochloride (DOX-HCl), a frequently used form of chemo. It collected in the cells’ heads, with an average of 15 picograms of DOX-HCl per cell. The researchers then released the sperms into the medium, and they swam toward the tumors, delivering the drug and killing an impressive 87% of their cells in just three days.

The second round of tests involved something even more surprising. The team enclosed DOX-HCI sperm cells within minuscule tetrapods — four-armed magnetic harnesses — so the spermbots could be guided to tumors using magnets.

In experiments, when a spermbot bumped into a tumor, the impact bent the four arms, causing them to open and loosen their grip on the cells that then carried the DOX-HCI-laced cells into the tumor.

With the sperm providing propulsion and the magnetic tetrapods their guidance system, the researchers see “sperm-hybrid micromotors” as offering intriguing advantages for chemo delivery over synthetic micromotors being developed by others. To start with, sperm’s ability to fuse with somatic cells protects medications from dilution and breakdown. Also, they can “swim through complex environments” due to their beating tails and membrane biochemistry that make the female reproductive system a comfortable environment. In addition, can last longer in the body since they’re less likely to be in conflict with the patient’s immune system due to proteins and prostasomes on sperm cells’ membranes.