Is This The Secret Behind the Mysterious Em Drive?

The secret behind the Em Drive’s thrust, which is real, may be in the long-discarded pilot wave theory. 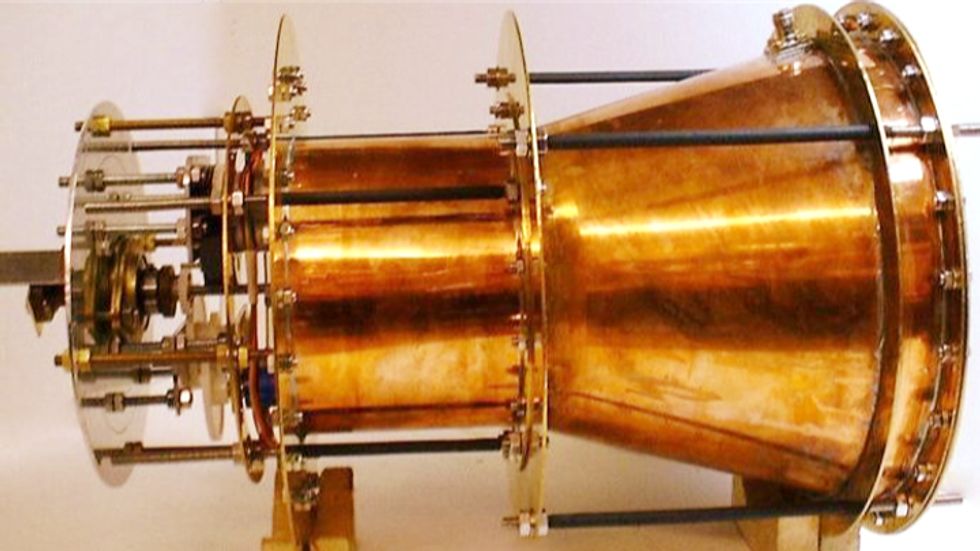 It’s the law. Newton’s third, specifically: “For every action, there is an equal and opposite reaction.” It’s the basis of existing space propulsion systems: As fuel mixes with oxygen, exhaust molecules shoot out from the back of a rocket, the speed of their acceleration matched by the rocket’s forward movement, or thrust. So then, how could Roger Shawyer’s seemingly impossible Em Drive actually be creating thrust without fuel, a clear violation of Newton’s law? And yet it does. The answer to this mystery, a new paper published in Journal of Applied Physical Science International suggests, may lie in a relatively obscure and controversial interpretation of quantum physics: pilot wave theory.

Pilot wave theory conflicts with one of quantum physicists’ most deeply held assumptions, but it would explain the Em Drive, and maybe even allow engineers to increase its power. Not to mention reshape thinking about quantum mechanics altogether if the drive winds up being compelling evidence of pilot wave theory’s validity.

At issue is the notion of a probabilistic universe in which particles play out all possible states simultaneously in superposition, reaching a fixed state only at the moment they’re observed. However weird this seems, the math does work out — quantum physicist Seth Lloyd of MIT says, “Quantum mechanics is just counterintuitive and we just have to suck it up.” This so-called “Copenhagen interpretation” is largely accepted among physicists, though, it must be said, not universally. Einstein famously criticized the idea, saying, “God does not play dice with the universe,” and his biographer, Abraham Pais, once said, “I recall that during one walk Einstein suddenly stopped, turned to me and asked whether I really believed that the moon exists only when I look at it.”

The pilot wave theory — also known as the Broglie-Bohm theory and Bohmian mechanics — was first proposed by Louis de Broglie in 1927 at the landmark Solvay Conference, a gathering of physicists’ including Albert Einstein, Werner Heisenberg, Neils Bohr, and Erwin Schrödinger. It rejects probabilistic particles. In pilot wave theory, particles have a definite location even when unobserved. The theory asserts that their position and direction is guided, or “piloted,” by a constantly changing quantum wave function that is itself continuously being influenced by other particles and waves. The theory holds that particles move to areas of higher intensity or a stronger energy density in the wave. The wave’s effect on a particle at any given moment depends on the wave’s current state, and it’s difficult to accurately predict that state in light of all the possible influencing factors. Therefore, the wave is subject to the Schrödinger equation in that its current state is only detectable as it’s observed. (Schrödinger considered the Copenhagen view ridiculous, and offered his famously nutty cat thought experiment as proof.)

Pilot wave theory does makes more intuitive sense, and it explains weird quantum behaviors as well as the Copenhagen view does. For example, in pilot wave theory, “spooky action at a distance” is explained by one huge, complex and extended wave influencing two non-contiguous particles at the same time. A study of fluidic behavior by a team in Paris produced results amazingly consistent with the wave-or-particle behavior seen in the classic Copenhagen single- and double-slit experiments.

It’s unclear, historically, exactly what arguments at the Solvay Conference led to a greater adoption of the Copenhagen view, but a series of now-discredited experiments by mathematician John von Neumann in 1932 effectively killed support for theory. That is, until it was revived in 1952 by David Bohm, with the encouragement of Einstein. The man who discredited von Neumann’s work and author of the Bell theorem, John Stewart Bell, wrote of pilot wave theory in 1986 that it, “seems to me so natural and simple, to resolve the wave-particle dilemma in such a clear and ordinary way, that it is a great mystery to me that it was so generally ignored.”

So how does pilot wave theory explain the mysterious workings of the Em Drive? Here's what it says on emdrive.com, “Thrust is produced by the amplification of the radiation pressure of an electromagnetic wave propagated through a resonant waveguide assembly.” The new work by Portuguese researchers José Croca and Paulo Castro of the University of Lisbon’s Centre for Philosophy of Sciences  takes a closer look at that electromagnetic wave. The researchers describe how they modeled the waves produced by the Em Drive’s asymmetrical cone, or fustrum. They found that the wave, like the fustrum, would be asymmetrical, with some regions exhibiting a higher magnetic density to which the Em Drive would be attracted, and thus move. The team says that this exonerates the Em Drive from violating Newton’s law, telling ScienceAlert, "We have found that applying a pilot wave theory to NASA's EM drive frustum, we could explain its thrust without involving any external action applied to the system, as Newton's third law would require.” In fact, NASA also wondered if pilot wave theory could be at work when it verified the thrust being produced by the Em Drive in 2016.

“The supporting physics model used to derive a force based on operating conditions in the test article can be categorized as a nonlocal hidden-variable theory, or pilot-wave theory for short.”

While so far the Em Drive’s pilot wave behavior has only been seen in the Paris team’s models, they tell ScienceAlert that, “we have also devised an experiment to detect and modulate subquantum waves."

The researchers may also have an idea how to increase the so-far tiny amount of thrust produced by Em Drives: By changing the shape of its fustrum, and thus the resulting electromagnetic field, noting “We have seen that the effect could be enhanced using a different shape for the frustum. In fact, a trumpet exponential form is expected to increase the thrust.”