If We’re Going to Talk About Brainwaves, We Should Know What They Are

A lay explanation of what brainwaves actually are. 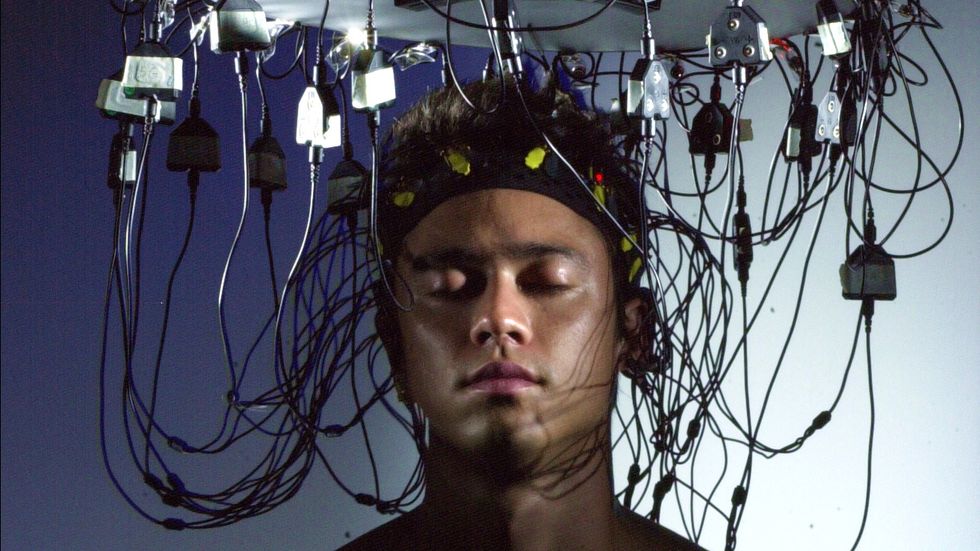 Brainwaves come up in conversation a lot, especially when you’re talking about mindfulness, creativity, falling asleep, and other processes we’re trying to understand. But do you know what a brainwave actually is? It’s kind of surprising.

Most of us have heard about at least some of these major brainwave categories (there are sub-categories, too):

An electroencephalogram, or EEG, can measure this electricity through electrodes temporarily stuck to a subject’s scalp.

With so many charges firing off, you’d think all of this electricity would add up, and it does. These being tiny amounts of electricity, though, the electrical output an electrode picks up is only between 4 and 200 millionths of a volt on the scalp. (It would be 1-2 mV directly on the surface of the brain.)

If all of the neurons fired at once, the brain would output about 0.085 watts, about what it takes to light a light bulb. It would take about 68 hours to charge an iPhone 5C.

The EEG creates a graph that charts the amount of power the electrodes receive  from the brain at a given moment.

The chart’s vertical axis shows the strength, or amplitude, of the current, while the horizontal time axis shows how it fluctuates over time. A brain’s output fluctuates up and down between its highest and lowest amplitude in a cyclic manner, producing the wavy patterns the EEG draws.

A brainwave’s frequency refers to how frequently the wave in the graph cycles between its highest and lowest amplitudes. If it does it six times per second, it’s a theta brainwave; if it does it 30 times, it’s a beta brainwave.Researchers have noted that certain brainwave frequencies are seen when subjects are in certain mental states. They don’t cause these states, of course—how could they, they’re just the visual artifacts in a graph on an EEG machine?

We don’t mean to suggest brainwaves aren’t important. Doctors have seen that some brain events, like epileptic seizures, are accompanied by certain types of brainwaves, so the EEG is an important diagnostic tool for confirming what’s been happening in a patient’s brain. Even more, it’s a consistent and reliable way of observing what this mysterious and powerful organ is up to.