71% of All Global Emissions Come From Just 100 Companies

The new Carbon Majors Report 2017 puts all the greenhouse-gas puzzle pieces together in one eye-popping report. 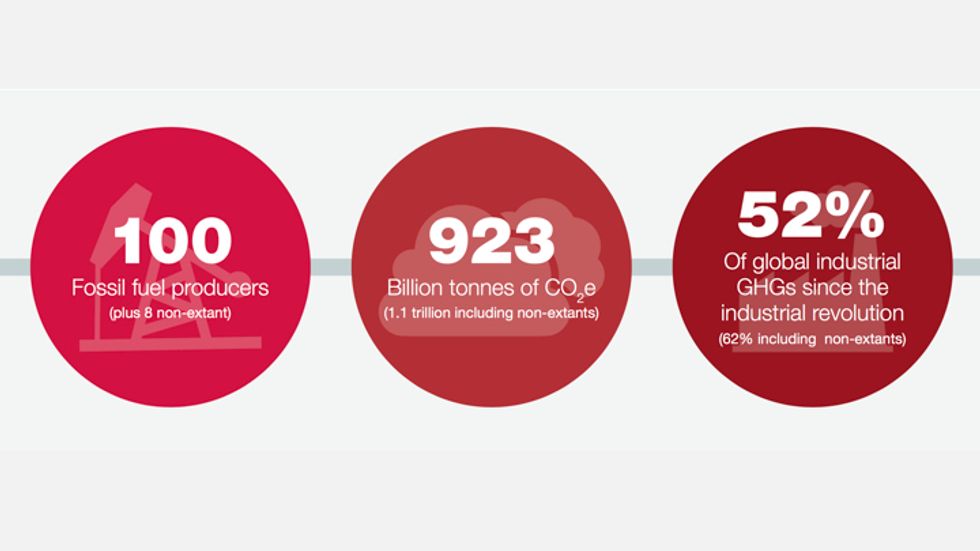 CDP’s Carbon Majors Database has just released its Carbon Majors Report 2017, a document for investors looking to understand the extent to which their fossil-fuel holdings are associated with carbon emissions. Short answer? A lot. It’s a remarkable document, packed with all sorts of eye-popping data and insights. Like this: Just 100 state and commercial producers are responsible for 70.6% of all greenhouse gases (GHGs) from 1988-2015. That’s 923 billion tonnes of C02e (a catch-all term that includes carbon dioxide, methane, nitrous oxide, and refrigerant gases).

And, no, things aren’t getting better yet: The fossil fuel industry has contributed as much GHG to the atmosphere in the 28 years since 1988 as it did in the first 237 years since the industrial revolution began, largely from the rapid increase in coal production.

Just 25 state or corporate entities since 1988 producers account for 51% of emissions.

Since the industrial revolution, the 100 companies and eight now-defunct entities in the database have been responsible for 1.1 trillion tonnes and 62% of GHGs in the atmosphere.

Much of the data on emissions is collected by governments around the globe, and the Carbon Majors Database is an attempt to aggregate information on carbon dioxide and methane emissions in one place. It was begun in 2013 by Richard Heede of the Climate Accountability Institute (CAI) to draw lines between emissions and the “carbon majors,” the entities producing them. The Carbon Disclosure Project (CDP) now administers the database. The point isn’t so much to assign blame as it is to get a better handle on where all these GHGs are coming from and what can be done by providing greater transparency for the facts.

The new report is aimed particularly at fossil-fuel investors because a fifth of all global GHG emissions are attributed to companies whose policies they can influence. And one of the main assumptions of the report is that with current levels of carbon use being unsustainable, these companies need to find another business model, and soon. As Michael Brune, executive director of the Sierra Club tells the Guardian, “Not only is it morally risky, it’s economically risky. The world is moving away from fossil fuels towards clean energy and is doing so at an accelerated pace. Those left holding investments in fossil fuel companies will find their investments becoming more and more risky over time.”

Still, publicly traded companies are only one piece of the puzzle. The fact is that the 100 carbon majors are a mix of nationalized industries and commercial companies. The Top 25 sources of GHGs are:

China’s coal production is far and away the largest contributor of GHGs, producing 14.3% of global emissions, or 128,933 tonnes of C02e. The second-worst, Aramco, contributes 4.5%, a lot less by comparison, but still quite a bit, 40,561 tonnes.

The investor-owned companies that have contributed the most GHGs since 1988 are: ExxonMobil, Shell, BP, Chevron, Peabody, Total, and BHP Billiton. Measuring the intensity of emissions, though, things look a bit different, depending on the mix of carbon sources a company employs.

Some of the larger companies are at least attempting to give the impression that they can see where this is all leading. Shell has begun a renewables program, and Chevron and Exxon Mobil are investigating carbon-capture technologies to pull C02e from the atmosphere. Non-fossil-fuel industries are way ahead of them, of course, with efforts such as the Re100 initiative.

In any event, experts say the carbon majors are still — unfortunately — hitting the Snooze button on their wakeup call. As Paul Stephens of Chatham House wrote last year, “If they do not change their business model, what remains of their existence will be nasty, brutish and short.”