Two recent examples from The New York Times, one from a columnist and one in an editorial, illustrate the danger of news media coverage of risk that is alarmist, incomplete, and inaccurate. 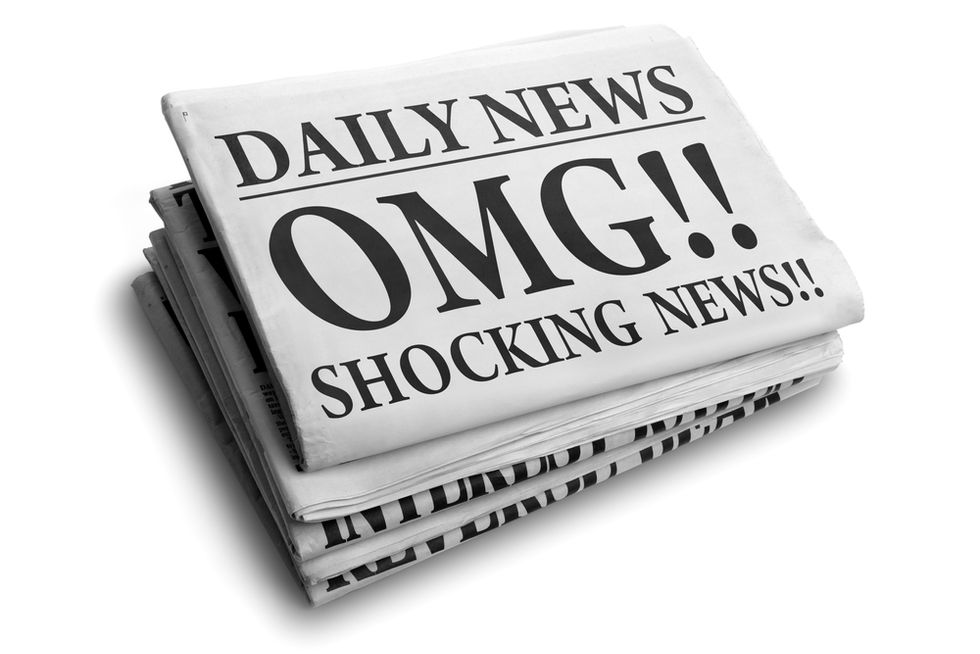 Two recent pieces in The New York Times illustrate a maddening truth about just how hard it is for the general public to make accurate assessments about risk. Not only are we challenged by a system of risk perception that relies on emotions and instincts and not a purely objective analysis of the facts, but also the facts we get from the news media, even from the supposedly most reliable and responsible sources of information, are often alarmist, and sometimes incomplete or just plain wrong. The pieces in The New York Times demonstrate the danger we all face when the news media we count on to help us figure out what’s dangerous and what’s not, betray their trust.

The first example is glaring, and has been harshly and deservedly criticized. A column last week in the Style section, "The Health Concerns in Wearable Tech" by technology columnist Nick Bilton was excessively alarmist about potential radiation exposure from wearable technology like smartwatches. With no hard evidence, Bilton likened the threat to the feared association between cellphones and cancer.

We have long suspected that cellphones, which give off low levels of radiation, could lead to brain tumors, cancer, disturbed blood rhythms, and other health problems if held too close to the body for extended periods.

Bilton cites a few studies that suggest a possible link, and dismisses the massive body of research that has essentially disproved such a connection;

There is, of course, antithetical research. But some of this was partly funded by cellphone companies or trade groups.

Not only is that wildly alarmist in tone, but it’s also incomplete and misleading journalism on the facts, bad enough to fail a freshman "Intro to Journalism" course. As Bilton’s editors admitted in an addendum to the piece, that they posted only after allowing it to run in the first place;

Neither epidemiological nor laboratory studies have found reliable evidence of such risks, and there is no widely accepted theory as to how they might arise. According to the World Health Organization, “To date, no adverse health effects have been established as being caused by mobile phone use.” The American Cancer Society, the National Cancer Institute, the Food and Drug Administration, and the Centers for Disease Control and Prevention have all said there is no convincing evidence for a causal relationship. While researchers are continuing to study possible risks, the column should have included more of this background for balance.

Bilton’s piece evoked widespread scorn. But there has been no such criticism of another inaccurate, incomplete and alarmist piece of risk reporting in The New York Times, this one written by no less than the newspaper’s editorial board itself. In the editorial "Clean Air Act and Dirty Coal at the Supreme Court," The Times rightly castigates the selfish coal industry for putting its interests above the public’s health by attacking provisions of the Clean Air Act that would curtail emissions of toxic pollutants. But in the process, the editorial writers commit the same errors Bilton did. They say;

“One of the most toxic of these pollutants is mercury…” and “… The Environmental Protection Agency estimates that improved air-quality standards prevent the premature deaths of as many as 11,000 Americans each year from exposure to mercury and other toxic air pollutants.”

That is just plain wrong, lazy journalism no less shoddy than Bilton’s. Mercury is a neurotoxin, but it doesn’t kill (unless you swallow several thermometers full). The lethal toxins generated by coal burning include arsenic, nickel, chromium, and acidic gases. The EPA says the rules being attacked by the coal industry will prevent 11,000 premature deaths, 4,700 heart attacks and 130,000 asthma attacks from these toxins. But none of those reductions will be from cuts in mercury. Mercury is a risk, as the EPA’s website says, because it “can impair children’s ability to think and learn.”

Not only is it inaccurate to lump mercury in with other lethal toxins. It is alarmist a la Bilton to call mercury “one of the most toxic” of the pollutants being regulated. The study establishing the neurotoxicity of mercury on which our health regulations are based, Cognitive Deficit in 7-Year-Old Children with Prenatal Exposure to Methylmercury, found that among pregnant mothers who ate seafood with high levels of mercury, children they bore suffered cognitive deficits of one quarter of one IQ point and other similarly minor cognitive impairments, deficits so small that they couldn’t be clinically detected in any child, but could only be measured across the entire population being studied (in the Faroe Islands).

And in another lapse of Risk Reporting 101, The New York Times editorial fails to note what the EPA itself says, that mercury is essentially only a risk to pregnant mothers because of the potential neurotoxic damage to the developing fetus. Instead, the editorial reinforces the common alarm about the widespread danger of mercury to everyone, the effect of which is to perpetuate fear that scares a lot of not-at-risk people away from eating seafood and benefiting from nutrients that protect against heart disease, the leading cause of death in the developed world. (Studies have even found that it might better for pregnant moms to eat seafood that contains low doses of mercury rather than no seafood at all, because the fish contain fatty acids critical for the development of healthy brain cells. In two studies, children born to pregnant moms who ate seafood containing mercury had better overall cognitive health than those who ate mercury-free fish. (See Maternal Fish Consumption Benefits Children's Development, in the Lancet.)

The inaccuracy and alarmism about mercury in The NY Times editorial got none of the criticism Bilton did. But it represents the same thing, the tendency of the news media to report on risk in ways that are often alarmist, incomplete, and sometimes just plain wrong. Whether it’s an environmental issue or about crime or disease or technology or transportation or any other kind of potential danger, alarmist, incomplete, and inaccurate risk reporting has the potential of doing very real physical harm. This isn’t just about scolding journalists. Better risk reporting is critical for public and environmental health and safety.