'Silent Spring' is 50. The Credit, and the Blame, It Deserves. 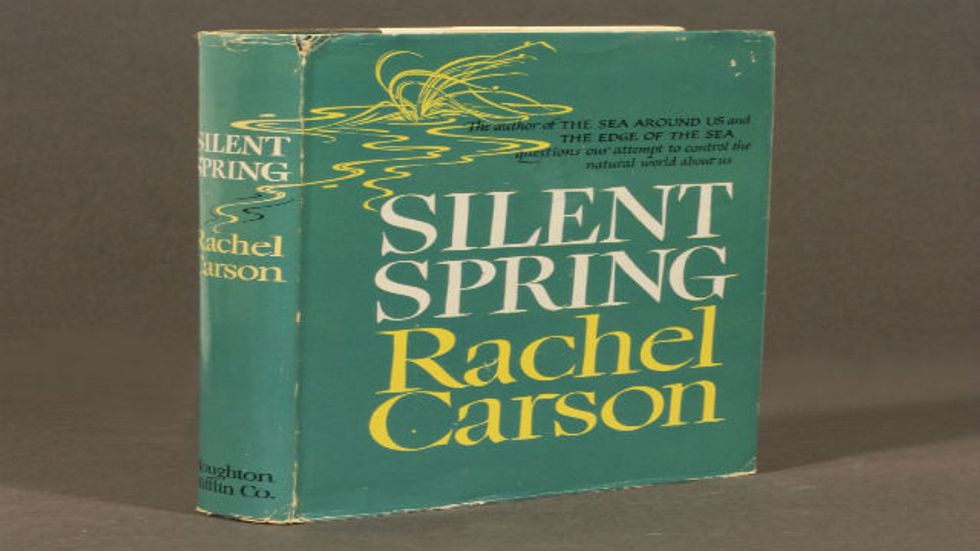 In the 50 years since Silent Spring was published, the environmental movement it helped create has accomplished a great deal. It may be less popular to suggest, but it is no less true, that this seminal book and the movement it helped spawn have also caused a great deal of harm. As much as Rachel Carson’s inspiring work deserves significant credit for our cleaner air and water and progress on so many other environmental issues, it also deserves some of the blame for having helped foster a set of accepted truths and common beliefs that have caused enormous damage to human and environmental health.

Given that there will hopefully be a lot of deserved praise for Silent Spring on this anniversary, let’s look at the other side of what Carson’s cri de coeur, and environmentalism, have done, because there is an important lesson here about the danger of narrow thinking that refuses to see the bigger picture.

Silent Spring and environmentalism played a major role in the public explosion of fear of cancer in the 1950s and 60s. Carson devotes an entire chapter to cancer, “One in Four”, and warns that we are “swimming in a sea of carcinogens”. As awful as this family of diseases is, the fear is sometimes excessive and dangerous in and of itself, a ‘Cancer Phobia’ that has led to millions of unnecessary surgeries and treatments that have done more harm than good, and policy that has concentrated more regulatory attention and fiscal resources on cancer than on some other greater threats to both human and environmental health.

Cancer has always been, and remains, the ultimate bogeyman of environmentalism, a fixation that reflects how the environmental movement arose from our 1950s fear of nuclear weapons and the carcinogenic radioactive fallout from atmospheric nuclear weapons testing. Throughout Silent Spring Carson emphasizes the dangers of industrial chemicals by likening them to radiation. “Chemicals,” she writes, “are the sinister and little-recognized partners of radiation in changing the very nature of the world – the very nature of its life.”

So it’s no wonder that opposition to various forms of radiation has been another core belief of environmentalism. Consider the costs of that. Most environmentalists oppose food irradiation, a treatment that kills any germs living in the food but doesn’t change the food itself. Food irradiation, safe and legal in countries around the world but little used because of environmental opposition, could eliminate millions of illnesses and deaths from food poisoning, and make food production more sustainable by reducing spoilage.

More dramatically, fear of radiation led to extraordinary safety requirements for nuclear power plants, far in excess of controls imposed on other high-risk industrial facilities, which made nuclear power less cost-competitive and led to more reliance on coal. Coal burning produced the devastating damage of acid rain. Particulate emissions from coal have killed hundreds of thousands of people since Silent Spring. And the greenhouse gas emissions from coal have contributed significantly to climate change, a risk that is unfathomably worse than the worst case dangers of nuclear power.

Silent Spring and environmentalism have also given us Chemo Phobia. Carson uses the word ‘chemical’ like a profanity, with phrases like “…every human is now subjected to contact with dangerous chemicals…”,  “…poisonous chemicals…”,  and “chemical death rain”. Chemicals are bad has always been a central dogma of environmentalism. A survey in the 1970s asked people what came to mind when they heard the world ‘chemical’. The leading answers were words like toxic, hazardous, deadly, destruction, accidents, kill, harmful, bad, and….drum roll please…cancer. (The naivete of this simplistic fear is entertainingly mocked by movement to ban dihydrogen monoxide, or see.)

But Chemo Phobia is no joke. The insecticide DDT, one of Silent Spring’s main targets, was banned for years before public health officials successfully pleaded with environmentalists to back off an accept  that DDT was saving millions of people from one of the greatest killers on the planet, malaria. Chemo Phobia fueled decades of fear of and bans on some artificial sweeteners, which could have been helping people lose weight. It frightened tens of thousands of women that silicone in their breast implants was a health hazard. It wasn’t, but many women suffered complications from having their implants removed, and more suffered from the stress of worrying.

The Chemo Phobia that Silent Spring helped spawn is only one version of another core assumption of environmentalism, that Natural is Good and Human-made is Bad. As Carson lamented “With the advent of man the situation began to change, for man, alone of all forms of life, can create cancer-producing substances…” and “In being man-made – by ingenious laboratory manipulation of the molecules, substituting atoms, altering their arrangement, they (industrial pesticides) differ sharply from the simpler insecticides…derived from naturally occurring minerals and plant products”.

This “Unnatural-O-Phobia” naivete does all sorts of harm as well. Worried about human-made hazards (as we should be), we stringently regulate the production and sale of pharmaceuticals. But not worried enough about natural substances, we fail to regulate herbal remedies with the same caution, and many of these biologically active substances do serious harm that would trigger loud environmentalist protests…if those substances were human-made. Fear of anything synthetic/human-made/unnatural is the foundation of resistance to genetically modified food, which has phenomenal potential not only to feed a growing global population but to do so in a more environmentally sustainable way than agriculture can currently accomplish. “What's wrong with genetic engineering (GE)?”  Greenpeace asks, then answers with “Genetic engineering enables scientists to create plants, animals and micro-organisms by manipulating genes in a way that does not occur naturally (my emphasis).”

This leads to perhaps the most profound harm of environmentalism. In the process of protecting us from the poisonous effects of modern technology, Silent Spring and the movement it helped spawn have poisoned our ability to think open-mindedly about the benefits of modern technology - including its environmental benefits - as well as its many real risks. It is a belief that in some ways humans are a cancer in the natural world. As Carson wrote (in her chapter on cancer), “With the dawn of the industrial era the world became a place of continuous, ever-accelerating change. Instead of the natural environment there was rapidly substituted an artificial one composed of new chemical and physical agents, many of them possessing powerful capacities for inducing biologic change.” Or as Bill McKibben argued in the book that helped make him a leader in the environmental movement, the human era has meant The End of Nature. Some call that book the modern Silent Spring, and McKibben the modern Rachel Carson.

This captures the central problem with Silent Spring, and with the more naïve and simplistic strains of environmentalism that it inspired. Carson and McKibben were/are basically right. The central case environmentalists make, that humans are mucking things up in what will almost certainly turn out to be catastrophic ways, is unquestionably true. But we are not separate from nature. Humans are a species too, part of nature, with the capacity not only for unprecedented harm but for phenomenal benefit, even the capacity to avoid some of the catastrophes we’re facing. Achieving those benefits and those solutions, however, will require a more open-minded attitude toward the products and processes of our modern world.

The environmentalism Rachel Carson helped spawn with Silent Spring, that simplistically raises alarms about the dangers of our technological world and refuses to acknowledge its promise, impedes solutions, and progress, and may actually be harming the very human and environmental well-being it’s trying to protect.