Can People With Different Views Find Ways to Cooperate? Here's One Hopeful Experience.

Twenty-one strangers with different values and views, thrown together on a Grand Canyon rafting trip, managed to set aside those differences and build community. 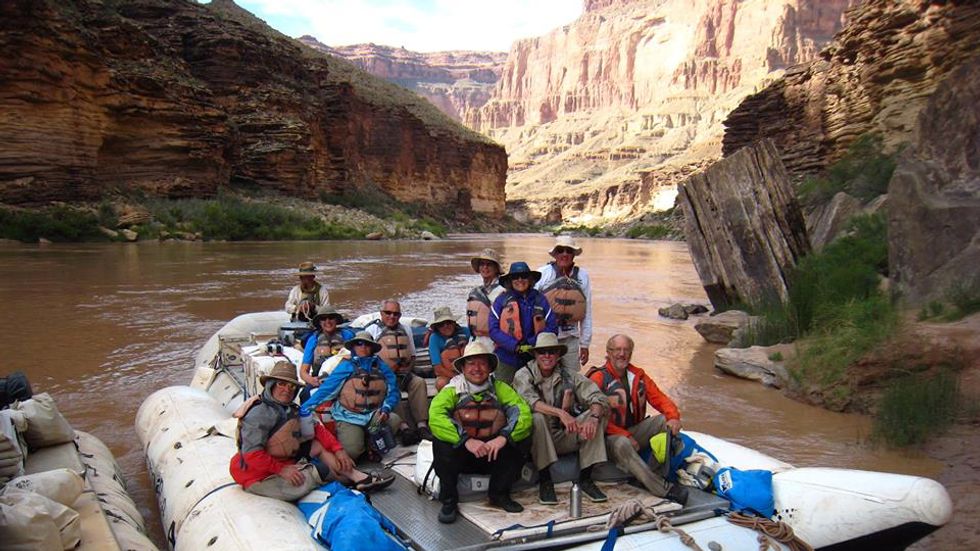 These are scary times. And not just from climate change and global terrorism and all the other physical threats we face. It’s frightening to live in a world where, more and more, people are circling their tribal wagons and fighting fiercely for their tribe’s views, and treating anybody with other values and views as the enemy.

We do this — identify as a member of one group or another and fight for our group’s views and values — to give ourselves a sense of power that we don’t have as individuals. And the need for a sense of power — of control — is crucial to how safe we feel. The less control we feel the scarier things seem and the more we turn to the groups we associate with for empowerment and safety... and the more threatened we feel by others.

We met at a pre-trip organizational meeting the night before launch, and instinctively started making judgments about everybody based on shallow first impressions...

All of which makes a recent experience worth sharing, because it offers hope that we can sometimes set our differences aside and work together in the name of safety. The basic social animal instinct to bond together into a group of individuals that look out for one another may be able to transcend the tribal divisions that keep us apart, at least under some circumstances.

Those circumstances were the product of an eight-day rafting trip with my wife and daughter and 18 strangers down the Colorado River through the Grand Canyon; 21 people thrown together on two motorized rafts, down churning rapids...

... up steep trails, into baking sun, and through shivering, drenched cold, onto campsites...

... home to scorpions and tarantulas and rattlesnakes (we saw the first two... no snakes)...

... with no connection with the outside world, and only three guides, and each other, to stay fed, sheltered, and safe.

Most of the group knew each other, relatives and friends of Jerry of Dayton who brought them together for this bucket-list adventure. We met at a pre-trip organizational meeting the night before launch, and instinctively started making judgments about everybody based on shallow first impressions — where people were from, why they had come on the trip, their dress, their age, even their language and manner of speech.

This was partly just a matter of gauging who it might be fun to hang out with on the trip, and who it might be a drag to be stuck with. But this instinctive activation of what psychologists call "representativeness bias" – quickly judging a person or situation based on a few initial hints and then subconsciously assessing how those hints fit into the larger patterns of what we already know — was driven by a much deeper need. We were social animals gauging who was in our tribe and who was in another... who was on our side and who wasn’t. That is a way of judging who will help keep you safe and who won’t... which is WAY more important that who it might be fun to be with on a rafting trip.

A deeper human instinct quickly transcended the shallower group/tribe distinctions of politics or religion or age or background, the familiar labels pollsters use to categorize people.

Based on these few early clues, it seemed that many of the folks we were about to spend eight challenging and potentially risky days with came from different places, had different values, followed different religions, and focused on different politics and perspectives than ours. Members of other tribes, not likely to be on our side. But as our trip got going, although some of our assumptions seemed to mostly be correct, they didn’t matter. A deeper human instinct quickly transcended the shallower group/tribe distinctions of politics or religion or age or background, the familiar labels pollsters use to categorize people. It was the social animal instinct to bond together and form a tribe — a society — with whomever you’re with, in the name of comfort and safety... a basic survival instinct.

Everybody avoided flashpoints of politics. We asked about each other’s lives, jobs, backgrounds. As time went on, we shared more intimate things; relationships, religious views. I even chatted with Jo Mar (named for Joseph and Mary of the Bible, he told me) about his Rush Limbaugh-informed antipathies toward Muslims, immigrants, and Native Americans. We listened to each other, learned from each other, and laughed. Different views, but no yelling. No tension. No combat. We disagreed, agreeably. He helped me check out my waterlogged camera. I offered him some ibuprofen for his aching hip.

This bonding among clearly different people was fascinating, and the highlight of a trip that had many. The common labels that sort people into groups — party, religion, views on polarized issues — gave way to a more fundamental and deeper commonality; we were all humans, social animals sharing a challenging environment, and in response to shared circumstances we all instinctively contributed to a tribal unity that served each of our interests.

[P]erhaps our little rafting group offers the hope that in smaller and more intimate communities ... it is instinctive in the social human animals to set some of our differences aside and cooperate...

To be sure, the group was small and the contact between members was intimate, imposed, and constant, unique conditions that helped us (and probably forced us to) bond together. These were the conditions that 2009 Nobel Economics Prize winner Elinor Ostrom found were critical for community cooperation and shared decision-making. Seeing faces, knowing names and personal stories, sharing an environment and a community, and common challenges, encourages people to transcend their differences and work together.

It would be naive to hope that our little demonstration of what occurs at the local, personal community level translates to a larger scale, that we can transcend our differences and cooperate to solve the huge problems facing the global community to which we all belong. (Ostrom said the same thing.) Beyond the local level, people are anonymous, and the “Think Globally” concept of community is merely an intellectual abstraction. But perhaps our little rafting group offers the hope that in smaller and more intimate communities, the scale at which we actually live our lives, that it is instinctive in the social human animals to set some of our differences aside and cooperate, when we have to address the shared problems and threats we all face.

David Ropeik is an Instructor at Harvard, a consultant in risk perception and risk communication, author of How Risky Is it, Really? Why Our Fears Don't Always Match the Facts, and principal co-author of RISK, A Practical Guide for Deciding What's Really Safe and What's Really Dangerous in the World Around You. He runs a program called Improving Media Coverage of Risk and was the Director of Risk Communication at the Harvard Center for Risk Analysis, part of the Harvard School of Public Health, for 4 years, prior to which he was a TV reporter, specializing in environmental issues, for a local station in Boston for 22 years.