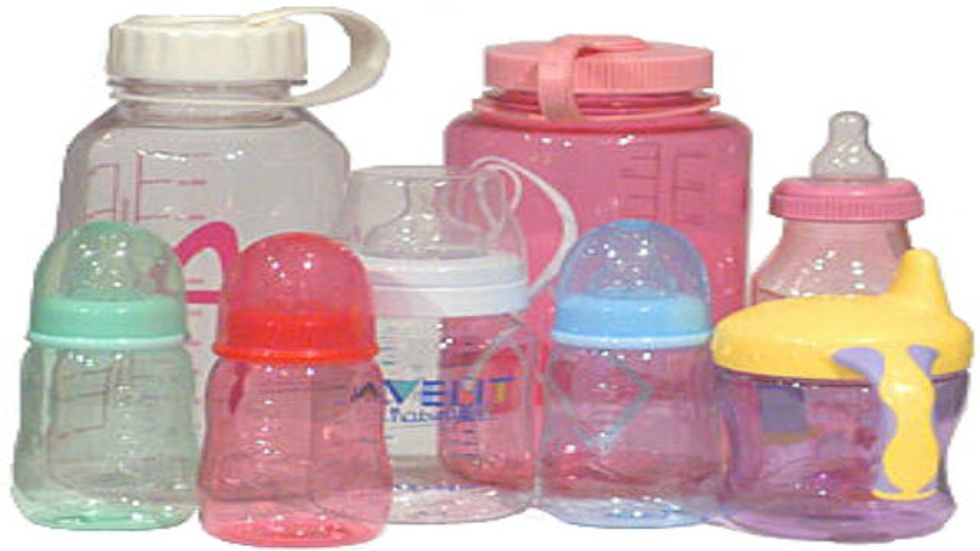 The FDA has banned bisphenol A (BPA) in baby bottles in sippy cups.

The FDA has not banned BPA for use in food containers.

What marvelous ongoing lessons in risk perception this issue continues to teach. What a clarion example of how fear, environmental advocacy, media alarmism, scientific uncertainty, and economics drive the legal and policy decisions about what is safe and what is not. What a nutty, messy, potentially dangerous, decidedly UNscientific, and completely understandable process for making risk policy BPA demonstrates.

BPA is the now notorious ingredient in some plastics, dental sealants, and in the lining of metal food cans (it protects us from the risk of the metal leaching into the food). Some studies suggest low doses of BPA might damage the developing brains of the fetus and infants and young children. The governments around the world in charge of protecting us from such things have so many questions about those studies that they all still say BPA, at the levels to which we are exposed, is not a health risk.

But a group of researchers, most of whom come from a strong environmentalist background, say there is enough reliable research to warrant an outright ban on BPA. Which no government has been willing to do. End of story, at least until more scientific evidence develops, right? Hardly. Enter the psychology of risk perception, which is far more a matter of how a risk feels than what the facts say.

Society has been seared with a deep automatic fear of anything associated with ‘chemicals’. Although that word evokes all sorts of negative responses in word-association research (death, cancer, harm, danger), the fear of chemicals is really about industrial chemicals. Why just them, when there are myriad natural chemicals that are harmful and deadly? Because human-made risks scare us more than natural ones. BPA is a great example here. Soy is a far more powerful endocrine disruptor (interferes with the body’s natural hormone system) than BPA. Heard about anybody calling for a ban on soy?

We are also WAY more afraid of anything that puts kids at risk than threats to adults, an instinct which serves well to keep the species going. We are way more afraid of risks brought to us by industries we have learned not to trust, like the chemical industry. We are way more afraid of risks when all the facts aren’t in, since uncertainty leaves us feeling powerless, and a lack of control makes any risk scarier and compels us to DO something…take control…to protect ourselves.

Oh…and we are also way more afraid of the risks that the news media tell us about, since they usually tell us about them in fairly alarming ways. A risk that involves human-made chemicals, threatens kids, comes from an untrusted industry, and where the facts aren’t all in, is a story sure to ring our emotional alarm bells, which makes it a story sure to get plenty of worrying media attention. Unfortunately, those stories rarely put the risk of BPA in perspective; if it is the danger some studies suggest, just how much harm does it do to any given victim?  A little? A lot? At what dose? Is one dose enough or do does the harm only come after a lot of doses over a long period? You’d think a factual story on the risk of BPA would include those basic facts about the risk. Most of them don’t, though many of them report that 90% of us have some trace of BPA in our body – OMG!!!! - without telling us what, if anything, that might mean for our health.

So, quite understandably given the presence of powerful emotional characteristics that make any risk scarier, which in turn makes it a better and more widely reported story for journalists, we freak out. And we try to gain control, by refusing to buy products that contain BPA…especially the ones that would expose our kids, like baby bottles and sippy cups. So manufacturers get rid of the chemical in those products, and then formally request the FDA to ride in heroically, after the fact, and declare a ban on what has essentially been out of most of these products for years. Which may appease some of the public fear and reduce pressure to ban all of BPA’s other (more lucrative to industry) uses. Including in the lining of food cans, which the FDA still says is safe but which exposes pregnant mothers, which is how fetuses get exposed in the first place, so we really haven’t protected them at all with a ban on baby bottles and sippy cups, have we!

I am not nearly expert enough to know what’s right or wrong here. In the end, the perception of any risk is up to each individual. But we need government to intelligently figure these things out on our behalf. Intelligently, because we don’t want government throwing our money at smaller risks just because they happen to get us all worked up, and we don’t want government to overlook the really big threats that don’t happen to set off our fears. But those sorts of errors are just what could happen if this is how decisions are made. “Today’s action is based on industry’s abandonment of these uses of BPA," an FDA official said.WOW! In other words, fear, environmental advocacy, media alarmism, scientific uncertainty, and economics drove this decision, not careful science about what is safe and what is not.