The Lonely Self? (Percy vs. Sagan—Part 2) 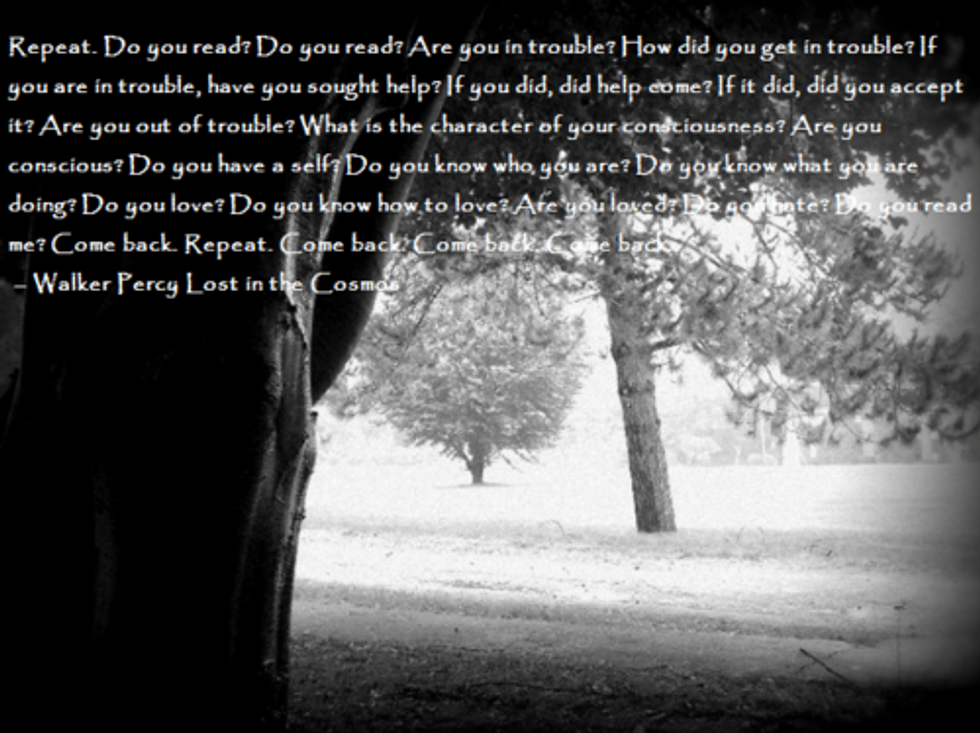 Here's the third part of my celebration of Walker Percy's Lost in the Cosmos.  I know I'm annoying many BIG THINK readers.  I may even be bad for their health; one wrote that my previous post gave him or her cancer.  But this is a THOUGHT EXPERIMENT, and you're perfectly free to disagree with it, have contempt for it, or just hate it.

Percy’s self-help book is basically in the form of a twenty-question self-help quiz.  The questions are about various self-understandings people have.  The self-understandings usually might better be called moods.  And the self-help offered amounts to clues about we are that are contained in the mood or personal experiences  The various multiple-choice answers Percy gives are often maddening because each of them seems partly true, but none of them contain the whole truth. In about every case Percy offers us ways to think about why we experience ourselves in this or that way as who we are. He impresses us with how little we really know about ourselves in our allegedly enlightened time.

The question of the lack of self-knowledge of the enlightened self Carl Sagan comes up in Percy’s two-part explanation of  “the lonely self.”  The first part explains the loneliness of “the autonomous self.”  We sometimes experience ourselves these days as “autonomous” or on our own without any guidance in figuring out who are and what we’re supposed to do.  The downside of being autonomous is being alone.  And the autonomous self can’t help but experience him- or herself not only as all alone in the world of other people, but all alone in the Cosmos that is indifferent to his or her singular existence.  For our transhumanists, for example, the fundamental situation seems to be ME vs. the Cosmos (or the nature that is out to extinguish forever MY very being).

One answer Percy gives is that, at this point in the progress of science, language—not just knowing some words but the capacity for complex grammar—seems to be the only point of human distinction left in the world.  To show that the other species have that capacity will complete “the dethronement of man” that has been the project of modern science.  Galileo and Copernicus dethroned man from what he used to believe was “his central position in the cosmos to an insignificant planet.”  Darwin deprived of the uniqueness claimed by a member of our species as an infinitely significant and irreplaceable being with a soul made in God’s image.  Now scientists are denying that “symbolic behavior” such as art and music—and we might add philosophy and poetry—are unique to our species too.  If our “dethronement” is complete, so too are our pretensions toward autonomy.

Scientists offer the self-help of curing the autonomous self of his or her loneliness by denying that autonomy really exists at all.  It’s not that the other species—or at least other eusocial mammals—are just like us, but we’re just like them.  Feeling alone—feeling anxious or displaced—for some existential or personal reason is based on an illusion.  Each of us, like all the other animals, is part of a species and part of a cosmos.  Bad news might be that studies now show that there’s nothing about ME that’s unique and irreplaceable.  And some more might be that I’m not “autonomous,” but determined by the impersonal laws or forces that govern the Cosmos as a whole.  The really good news, though, is I am not alone.  Autonomy is just another word for clueless loneliness—or nothing left to lose but experiencing oneself as not not being.  But we now know, we can hope, that autonomy is not scientific.

By writing of our “dethronement,” Percy calls attention to the view of Pascal that we experience ourselves as “deposed kings.”  Our basic experience is one of alienation, of being deprived somehow of our rightful place, our true home.  But scientists have showed us that our experience of dethronement is based on a vain and superstitious misperception.  Being miserable without God depends on the illusion that there is a God and that we’re somehow made in his image.  The cure for the misery is the scientific overcoming of the illusion.

But Percy’s next answer to the question of loneliness makes it clear that scientific self-help—because it isn’t really scientific—just doesn’t work.  The truth is man remains “a lonely and troubled species, who does not know who he is or what he is supposed to do with himself, feeling himself somehow different from the other creatures, both superior and inferior.”  One source of our feeling of superiority of course is that we study the other animals scientifically, and they don’t study us.  We have no reason to believe that there are any dolphin scientists or philosophers, that they can in a way transcend the world of bodies through their minds.  Scientists don’t really believe for a moment that they’ll be able to communicate with the dolphins about physics and about their place in the Cosmos.

We feel inferior because man is obviously “not a very good animal.”  We, unlike the dolphins, so often act stupidly and self-destructively.  Our cruelty and sentimentality seemingly needlessly threaten the very future of our species.  We’re the beings capable of so trashing our planet that it may soon be uninhabitable, and we’re the beings who may yet just blow ourselves up for emptily ideological or even ridiculously superstitious reasons. Both global warning and our birth dearth are evidence that our unique and seemingly inexplicable pretensions toward autonomy lead us even to slight to the eve of destruction our fundamental duties to our species.

We really know there’s no scientific cure for the perverse—even loony—behavior caused by our self-conscious experience of being alone in the cosmos. We remain more anxious than ever to discover our “place in the Cosmos.”  And we’re not really be helped much at all by a science that knows more and more about the Cosmos and less and less about each of us. Communicating with the chimps and dolphins on some elementary level won’t eradicate what makes us superior and inferior to them.

The scientist, Percy concludes, has more trouble than ever fitting himself into the Cosmos he has otherwise explained.  The physicist’s mind is at home in the Cosmos, but not the whole person—the real guy—who, among other things, engages in the scientific study of the Cosmos.  Science can’t save even him from his troublesome need for periodic “reentry” into what he perceives as the dreary real world of human beings.

Percy turns in his second account of the lonely self to the real guy—the lonely guy—Carl Sagan.  Sagan's cure for his own loneliness seems to be his promotion of the probability—with little to no scientific evidence—of the real existence of other forms of intelligent life elsewhere in the Cosmos.  But I’ll have to turn to his desire to make CONTACT with wise and benign ETs next time.